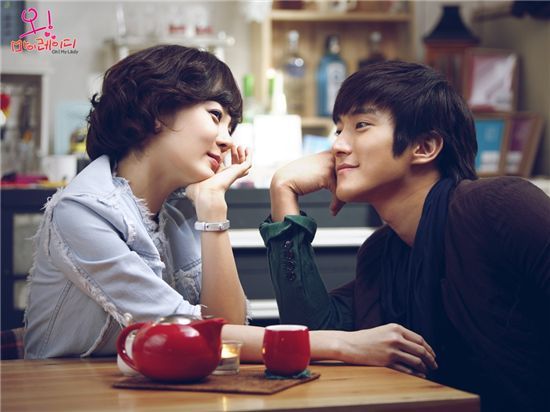 Sung Min-woo (played by Choi Si-won) proposed to Yoon Gae-hwa by saying "Please be a mom for Ye-eun", just as viewers had expected. It was predictable because throughout the series, the romance between an arrogant, unmarried top star and a poor but humane divorcee Yoon Gae-hwa (played by Chae Rim) had been developing quickly and faithfully to the "matron becomes a Cinderella" principle, a formula that had peaked in MBC TV series "Last Scandal". As viewers could practically picture the ending scene already -- the two characters confessing their feelings for each other which would be ensued with a sweet kiss -- the important issue at hand was how the producers would fill up the hour leading to the ending scene.

The producers of "Oh! My Lady" chose to play out the story in a way that revealed both the show's strength and weakness that had been evident throughout its run. When Yoon Gae-hwa turns down a marriage proposal from Sung Min-woo, saying she has "no plans to marry again because divorce caused too much pain", and later agonizes over her decision, it failed to spark any imagination to the story such as 'things that could happen after marrying a top star'. Yoon Gae-hwa's response only highlighted her concerns in a realistic and serious light, and thus failed to enliven the unique, comedic elements of the drama. In addition, the loose structure of the show was re-confirmed when Sung Min-woo visits Gae-hwa's ex-husband, and demands that he apologize to her. And when Gae-hwa finds out what he did, she is so moved by his actions that they resolve their misunderstandings.

However, there were several scenes that helped the show serve its purpose as a light-hearted drama that makes viewers smile. For example, there is a hilarious scene where Sung Min-woo is too drunk to notice a reporter (played by Kim Kwang-gyu) turning the notebook computer back on to write an interview article. Another notable scene is when Choi Si-won looks so casual and nonchalant as he pours out his affections by saying cheesy lines such as "You are More Beautiful Than a Flower". "Oh! My Lady" was neither too elaborate nor too intense -- that is what saved and, at the same time, killed the show.

"[REVIEW] TV series "Oh! My Lady" - Final episode"
by HanCinema is licensed under a Creative Commons Attribution-Share Alike 3.0 Unported License.
Based on a work from this source