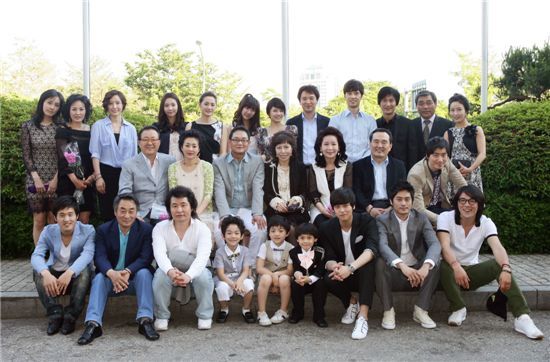 The final episode of "Three Brothers" would make a good example of a collection of all the cliches that could be seen in the finale of a family drama. It being a show that focused on characters' conflicts throughout its 70-episode run, the drama poured out cheesy, conventional solutions as it rushed to work out all the problems; trashy mother-in-law Gwa-ja (played by Lee Hyo-choon) threw herself into doing community service, as if she had to do more to be forgiven than just reconciling with her family; while Soon-kyung (played by Park In-hwan), who had been feeling helpless since retiring from work, restored his authority as the man of the house by setting up a counseling office to help ex-convicts adjust to society; Gun-gang (played by Ahn Nae-sang) helped Chung-nam (played by Do Ji-won) achieve her belated dream of going to college; married couple Hyun-chal (played by Oh Dae-gyu) and Woo-mi (played Kim Hee-jung-II) enjoyed their second honeymoon phase as well as expanding their business; another couple I-sang (played by Lee Joon-hyuk) and Eo-young (played by Oh Ji-eun) finally ended their pain of being unable to conceive a baby with Eo-young making a particularly heartwarming reconciliation with her stepmother Sol-yi (played by Lee Bo-hee).

On the other hand, female villain Yeon-hee (played by Kim Ae-ran) shed tears of repentance while looking like a beggar and faithfully completed the dual formula of a family drama; that there is no gain without pain and that what goes around comes around. During the sixty minutes, which was barely enough time to show how characters Tae-baek (played by Yoon Joo-hee), Sa-joong (Kim Min-hyeok) and Nan-ja (Lee Sang-sook) ended their romance, even went as far as showing a subtitle that read "Two years and five months after" and depicted sisters Eo-young and Boo-young (played by Jeong Da-yoon) both giving birth on the same date. This means that a total of four newborn babies including the twins bore by Chung-nan, were used in the final episode as tools of reconciliation.

Even the final scene -- the finishing touch of all these familial sutures -- where everyone was dancing in front of the banquet table looked bizarre. With its extreme characters and contrived circumstances, "Three Brothers" was indeed a drama that was worthy of being labeled a "trashy drama". On another note, the drama -- within its boundary as a home drama -- portrayed all kinds of conflicts that could possibly exist in the world and made people aware of the uncomfortable truth that there is no one as close and distant as one's own family. Even people, who said it is a show they love to hate, could not bring themselves to turn the channel. Seriously, is the writer -- the ever-so-consistent Moon Young-nam -- the cruel one or is reality?

"[REVIEW] TV series "Three Brothers" - Final episode"
by HanCinema is licensed under a Creative Commons Attribution-Share Alike 3.0 Unported License.
Based on a work from this source