[REVIEW] TV series "Will it Snow for Christmas?" 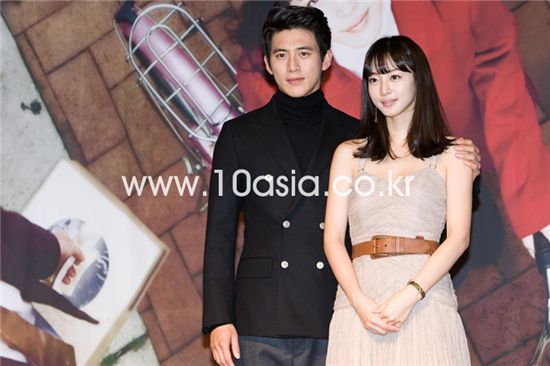 From left, actor Go Soo and actress Han Ye-seul pose during a photo session of a press conference for SBS TV series "Will It Snow for Christmas??" held at the Imperial Palace Hotel in Seoul, South Korea on November 25, 2009. [Chae Ki-won/10Asia]

Written by Kang Myoung-seok
Not once in his life has he not been the smartest in his class. He is also good-looking and can fight well. He still misses the girl he loved when he was in his teens. And he is a man of integrity who will be straightforward to the daughter of his company's chairman. Kang-jin (played by Go Soo) in SBS TV series "Will It Snow for Christmas??" is not a man. He is a mythical character in existence for the women and the drama is the alter for that myth. When Kang-jin reveals the muscles on his forearms to execute the miracle of driving a nail into Ji-wan's (played by Han Ye-seul) wall, people around him will give their testimony on their sighting. Even Tae-joon (played by Song Jong-ho), the top elite in the Bumseo Group, commits an irregularity out of fear of Kang-jin, the chairman's daughter Woo-sun (played by Sun Woo-sun) praises Kang-jin for his honesty and sturdiness while the owner of the cafe at which Ji-wan works says he would want Kang-jin to be his nephew-in-law.

Hence, it seems it will start snowing if Kang-jin says so, and everyone who exists within the world of "Will It Snow for Christmas??" is in love with him. It would not be an overstatement to say that Ji-wan and Kang-jin's role in the drama is to show that they have to break up although they love each other and Tae-jun is considered a cowardly man the moment he starts competing with Kang-jin. The balance between the characters crumble and when Kang-jin disappears from the screen, the remaining characters are busy confessing their emotions about him rather than moving the drama forward with their own stories.

"Will It Snow for Christmas??" seems to be scenarist Lee Kyueong-hee's version of "Twilight". Some people may scream at the drama full of cheesy lines such as "I promised Ji-wan in my dreams. That I would never lose you again" rather than laying forth incidents which are likely to happen. That is why Lee appears to have retrogressed with this show. In MBC TV series "Thank You", she went to the countryside to show how a cold-hearted man living in the city discovers the warm side to him. But in "Christmas", the characters go to the countryside to focus on reenacting past memories. As if she were a dreamy teenage girl, Lee raves over Kang-jin, the character she so perfectly created, and makes all her romantic stories come true through the drama.

Kang-jin's mother (played by Jo Min-soo) shows the sentimentality contained within "Will It Snow for Christmas??" She is an adult who has tasted the sweets and bitters of life but also like a teenage girl who tells the wife of the man she loves, "I won't smile in front of him". This is how it can be seen that Lee is retrogressing -- through a sense of exhaustion and denial of adults and the city. In "Will It Snow for Christmas??" the city is a place where men like Tae-jun compete. Meanwhile, Kang-jin who grew up in the countryside always plays fair. Both Ji-wan and Kang-jin are characters who fit in better at a cart bar than elegant restaurant and Ji-wan's dream is also to return to the countryside someday. Lee focuses only on the perfect love of the perfect man Kang-jin, while denying the city and the love of adults. Of course, as a result, the number of Kang-jin's female fans continues to increase with each episode. The drama hits the spot of its female viewers by showing Kang-jin loosening his tie during a meeting or agonizing over work. And Ko-soo's natural and clean-cut acting, in which he does try too hard in pretending to be the perfect Kang-jin, brings out an explosive attractiveness to the character.

But with Lee focusing on Kang-jin, it is hard to find the element of warmth regarding humans which were found in her past hit dramas. There is no more drama but just Kang-jin. That is why I am more curious to know where Lee's mind is rather than Ji-wan's. Why has she fled from reality and instead concentrating on this glamorous man's love story? Maybe she, and us, all want to flee this city and meet a man like him.

Written by Cho Ji-young (TV critic)
It is necessary for two people to endure several obstacles in order to make their love desperate and beautiful. It is a well-known formula that the more they go through painful circumstances, where they cannot tell of their love for each other, the deeper their love grows. Here, the easy way would be to introduce a villain -- a necessary tool for delivering the story -- who consumes his life being jealous and trying to interfere with their love. The drama "Will It Snow On Christmas?" does not introduce such an obvious villain, but rather puts restrictions on the young characters with their family members. Living parents (Woo-jeong's father) and dead parents (Kang-jin's father) both serve as obstacles for their romance. The death of a brother (of Ji-wan), who used to be a living cupid while he was alive, becomes a huge obstacle in their love.

The reason Ji-wan (played by Han Ye-seul) left Sanchung was because her brother (played by Song Joong-ki) died. The reason her brother died was because he had drowned in the water while looking for a pendant for Kang-jin (played by Go Soo). The reason Kang-jin was extremely obsessed with the pendant was because it was given to him by his dead father. Tae-joon (played by Song Jong-ho) was conflicted between two women was because his father's life was hanging by a thread (he eventually died) and Jun-su (played by Chun Ho-jin)'s illness will soon be an important variable in the story's development. Aside from the parents of main characters, even Tae-joon's wingman is being loyal to Tae-joon, who provided money for his mother's surgery. Why are there so many family members who were either never around, disappeared or will soon disappear? The long-gone family members haunt the remaining people in the form of huge guilt. The survivors turn away from and give up on their own happiness in order to console the old ghosts.

In "Will It Snow On Christmas?", what makes youth so regrettable is that love is too easily mortgaged by guilt. Sudden tragedies -- like the early death of parents and accidental death of a brother -- are sad but somewhat violent set-ups that serve as convenient devices in the story. When the characters who move within such set-ups walk out into presumed misery, the viewers are too easily convinced to think, "Well, his father died".. or "Well, her brother died.. "

Kang-jin goes one step further in turning away from love -- he plans to pretend that he is a bad guy. The reason that his choice is important is because the weight of the drama ultimately lies on Kang-jin. The drama shined during that brief moment when he met Ji-wan in Sanchung and opened his unwilling heart. And when his heart, which had been sealed up for eight years, closed up as soon as it had opened, the show also embarked on a ruined path. The character Kang-jin, who is as passionate as fire on the inside but never explains anything or resents anyone, always stands alone, tall and lonely. Ji-wan and Tae-joon are just as lonely and pained, but it is disappointing that all of their stories and conflicts are too monotonous and one-dimensional. Viewers grow tired as they watch the characters confirm their love for each other, then quickly change their minds and see the usual dramatic pattern where two people who were supposed to meet at a certain time never do meet. Moreover, the unfulfilled love story of their parents is frustrating as well, even if it serves a mirror that lights the love triangle of the young people from afar. The tears of each character glitter, but their world seems beautiful and artificial only when it is looked at from a distance. What the camera wants to capture when it approaches the characters is not just a sad look in their eyes but logical, detailed movements of their life. Aren't there many other ways to express the inner pain besides playing ballad music in the background?

One wonders where this drama is headed now that Christmas is over and the show feels like a belated love letter. One hopes that Kang-jin, who hides his true feelings and pretends to be bad, is not too late in delivering his heart and that he will be able to save not only Ji-wan but the drama as well.

"[REVIEW] TV series "Will it Snow for Christmas?""
by HanCinema is licensed under a Creative Commons Attribution-Share Alike 3.0 Unported License.
Based on a work from this source