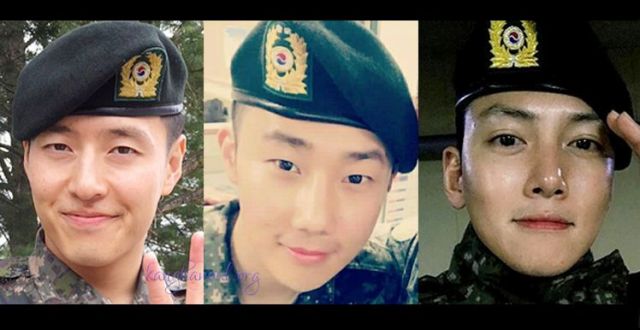 According to media reports, the musical production that features active duty soldiers Kang Ha-neul, Ji Chang-wook, and Kim Sung-kyu will premiere on September 9, 2018 at Theater Yong, National Museum of Korea.

Original musical "Shinheung Military Academy" is set against the backdrop of infamous and dark events in Korean history from 1907 to 1920, when Korea was under the Japanese occupation. Due to Japan's tyrannical rule, anti-Japanese sentiments grew among Koreans at home and abroad, and gave birth to armed resistance movements such as the "Shinheung Military Academy" in Manchuria, which aimed to regain Korea's independence and autonomy. The musical production will highlight the lives of the patriotic youth who, despite their struggles amidst the chaotic and turbulent times, chose to sacrifice their lives and fight for freedom of their country.

The main cast consists of Kang Ha-neul, who will take on the role of Pal-do, representative of the youth. He is an orphan and has never met his parents. His background did not deter him from reaching for his dream of independence for his motherland. His hardwork and training at the Academy paid off as he emerged as an outstanding freedom fighter. Meanwhile, Ji Chang-wook will play Dong-kyu, a distinguished student of the Academy and son of an anti-Japanese Confucian scholar. Finally, INFINITE's Kim Sung-kyu will play the role of real-life historical figure, General Ji Cheong-cheon. General Ji was a graduate of the Imperial Japanese Army Academy who later led the Korean guerrilla forces against the Japanese.

The 150-minute musical also boasts of a strong production team recognized as the best in Korea. At the helm is director Kim Dong-yeon (Infinite Power, M. Butterfly, Hamlet: The Play), one of the most popular and in demand directors at the Daehangno, Seoul's theater and performing arts district. Playwright Lee Hee-jun from hit musical "Mama Don't Cry" will write the script and lyrics, while composer Park Jung-ah, also from "Mama Don't Cry" will be responsible for all the musical elements in the production.

Performances will run from September 9 to the 23 at Theater Yong, National Museum of Korea and it is scheduled to go on national tour until the end of the year.

"[riversky's Take] Details About Kang Ha-neul's Military Musical "Shinheung Military Academy" Unveiled"
by HanCinema is licensed under a Creative Commons Attribution-Share Alike 3.0 Unported License.
Based on a work from this source