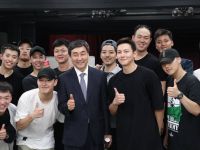 Upcoming military musical "Shinheung Military Academy" will hold its production briefing on August 14 at 2PM (KST). It will take place at the Taeguk Hall of the Ministry of Defense headquarters in Yongsan, Seoul.

Set during the period when Korea was under Japanese colonial rule, "Shinheung Military Academy" tells about the patriotic youth who established a military institution that trained Korean young people to fight for their country's independence.

"Shinheung Military Academy" commemorates the 70th founding anniversary of the Republic of Korea. Performances will be staged from September 9 to 23 at Theater Yong, National Museum of Korea in Yongsan, Seoul.

"[riversky's Take] Military Musical "Shinheung Military Academy" Schedules Production Briefing"
by HanCinema is licensed under a Creative Commons Attribution-Share Alike 3.0 Unported License.
Based on a work from this source