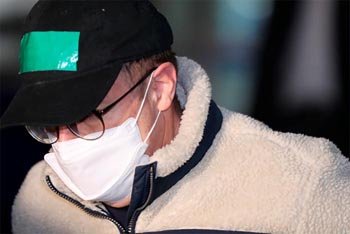 TV personality Robert Holley, also known as his Korean name Ha Il, was released from custody on Wednesday after a court refused to issue an arrest warrant.

The Suwon District Court said Holley has admitted the charges and the evidence has already been collected so there is no risk that he could tamper with it. It also took into account that he has expressed remorse and has no criminal record.

Leaving a remand prison in Suwon, Gyeonggi Province, Holley told reporters, "I'm sorry" and left in a car that was waiting for him.

Holley had already been investigated in January last year on a tip-off from a 34-year-old man who was arrested on charges of drug use. The man claimed that he and Holley were in a homosexual relationship and injected meth together at Holley's house.

But when the California native and lapsed Mormon turned up for questioning, he had shaved his hair and waxed his body to prevent police from collecting hair samples and had to be let go.

"Robert Holley Avoids Arrest"
by HanCinema is licensed under a Creative Commons Attribution-Share Alike 3.0 Unported License.
Based on a work from this source