Rolling Stone Picks K-Pop Groups Most Likely to Make It in U.S. 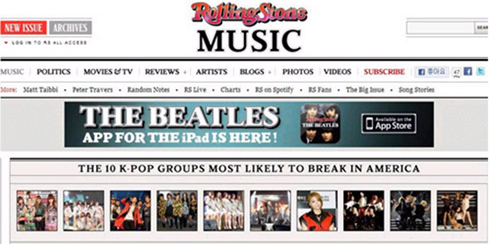 U.S. magazine Rolling Stone ran a special feature on K-pop on Sunday and picked 10 Korean singers who are most likely to succeed in the U.S.

Under the headline "The 10 K-pop Groups Most Likely to Break in America", it named six girl groups -- 2NE1, After School, Girls' Generation, Miss A, Sistar and Wonder Girls -– three boy bands -- Big Bang, SHINee and BEAST -- and solo singer Ailee.

The magazine praised Girls' Generation's "calculated" and "colorful" choreography "in flirty outfits", as well as the "genre-hopping and large personalities" of 2NE1 members.

Ailee (23), a rookie female vocalist, was the only solo singer to make the list. Rolling Stone wrote that the New Jersey native's "knowledge of both American and Korean culture puts good odds on her crossover potential".

The magazine added that K-pop "embraces genre fusion with both singing and rap, and emphasizes performance and strong visuals".