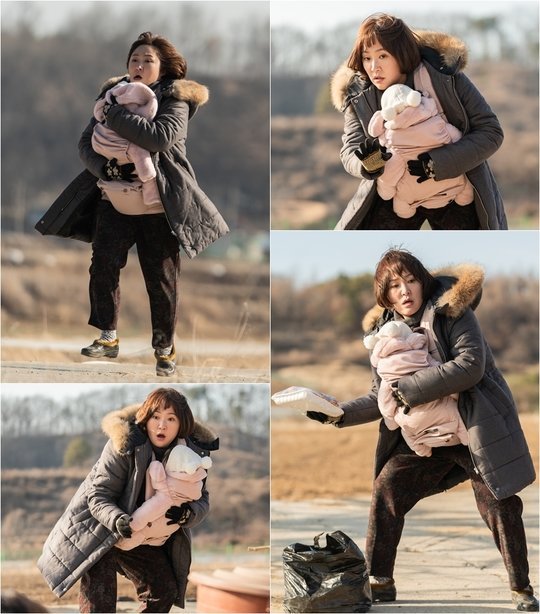 Korea's most popular single (well, formerly single) woman Young-ae is coming back with laughter and as a mother.

Still cuts of "Rude Miss Young-ae Season 17" have been released on the 21st.

Young-ae (Kim Hyun-sook) is running through a field with her baby in her arms. She's wearing flowery work pants and fur shoes. She looks like she's running away from something and her face is hilarious. In the following picture, Young-ae seems ready to fight something ahead of her and she throws herself out there to keep her baby safe.

"Rude Miss Young-ae Season 17" is coming back with a new story. After all those years she struggled with romance, dieting and single-woman issues, Lee Young-ae is back as a mother, a wife, and a working mother.

The team is completed by Kim Hyun-sook, Lee Seung-joon, Ra Mi-ran, and Lee Kyu-han from the original team and newly joined by Jung Bo-suk, Park Soo-ah, and Yeon Je-hyung.

Meanwhile, "Rude Miss Young-ae" is the longest running Korean seasonal drama that has been popular over the last 10 years. Based on realistic backgrounds, the episodes carry out new and unique humor, creating legend-scenes every season. "Rude Miss Young-ae Season 17" is beginning on the 8th of February.

""Rude Miss Young-ae Season 17" Tackles Motherhood and Working Moms"
by HanCinema is licensed under a Creative Commons Attribution-Share Alike 3.0 Unported License.
Based on a work from this source