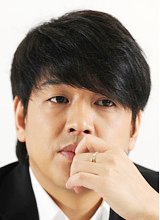 Actor Ryu Si-won has been charged with threatening his wife in the course of their divorce proceedings.

Police in Seoul's Gangnam district on Tuesday said Ryu's wife filed the charges against him and that the actor was questioned on Monday.

Police have now handed over the case to prosecutors. "We found that the threats did not concern disputes over alimony or child custody, but some of the charges were deemed genuine", a police spokesman said.

Ryu's agency denied the charges. It accused her of trying to gain an advantage in the divorce case by submitting in evidence an argument she had recorded years ago.

The two married in 2010, but Ryu's wife, a trained dancer nine years his junior, filed for divorce a couple of years later.

"Ryu Si-won Charged with Threatening Wife"
by HanCinema is licensed under a Creative Commons Attribution-Share Alike 3.0 Unported License.
Based on a work from this source