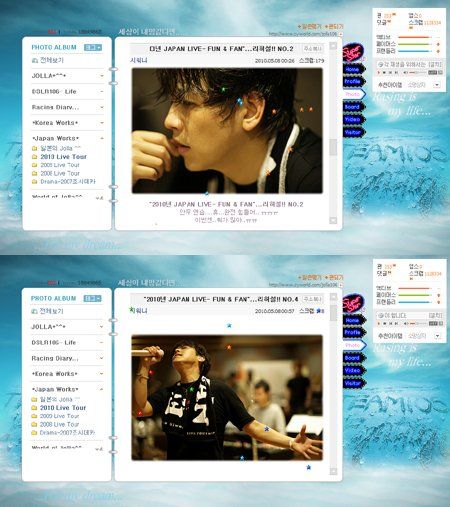 Hallyu star Ryu Si-won has posted up photographs of himself rehearsing for his current Japan tour on his Cyworld mini-hompy (http://www.cyworld.com/jolla106).

The singer and actor over the weekend put up a collection of recent pictures taken during rehearsals for his "2010 JAPAN LIVE - FUN & FAN" tour, which kicked off at Yokosuka Art Theater on Monday.

"It is hard practicing the choreography", the Korean star wrote on his post. "But it feels good to sweat a lot for the first time in a long time".

Ryoo was seen hard at work in the photos, practicing his singing with the band as well as going over the dance steps with the dance crew.

He also put up a picture of himself and his team of dancers who all went out for dinner after finishing their final rehearsal, assuring fans, "We will show you a fantastic performance that we have been practicing for two months".

His fans, a majority of whom were Japanese, left responses underneath the photos, encouraging and supporting the singer for the upcoming concerts.

He has led a particularly successful career in Japan since debuting in the country six years ago, releasing 17 albums and holding five concert tours to date. His latest full-length album, which includes a famous Japanese rock tune called "Garden of Love", was released on April 7.

The tour will continue onto various major cities including Saitama, Nagoya, Fukuoka, Osaka, Kobe and Tokyo until July 1.

"Ryu Si-won posts rehearsal pics for Japan tour"
by HanCinema is licensed under a Creative Commons Attribution-Share Alike 3.0 Unported License.
Based on a work from this source