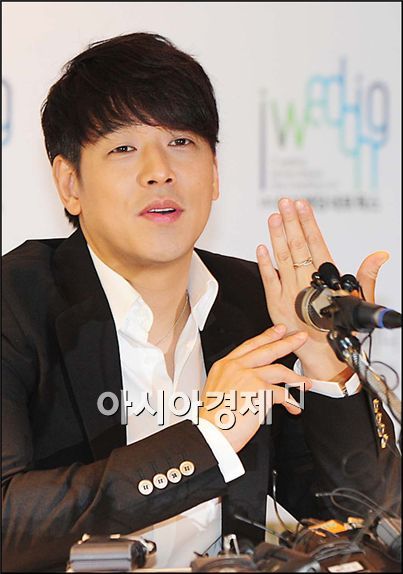 Hallyu star Ryu Si-won, soon-to-be husband and also soon-to-be dad, has said he "will be a faithful husband".

He made the remark at a press conference held in Seoul on Wednesday afternoon, after having taken fans and entertainment watchers by surprise when he broke the news of his October 26 wedding and bride-to-be's pregnancy on his official fan site earlier in the day.

"I'm not the type that likes to be secretive however, so we openly ate at restaurants and never hid but it somehow didn't get reported in the media", a beaming Ryoo explained.

He added however, that he only told his friends about their relationship last month and his parents about their child in August because he wanted to be careful.

He then revealed more detail about his bride-to-be, explaining that she is "very feminine and calm" and "beautiful in my eyes". She majored in dance in college.

"What's best about her is that I feel so comfortable. She thinks very similarly to me...... We get along very well", he also said of his nine year younger bride.

He wrapped up the press conference thanking his fans in Korea and Japan for their congratulatory messages.

After thanking fans who just last weekend had flown into Korea from around Asia to celebrate his 38th birthday with him, Ryoo had confessed through his posting that he will soon marry and "will also become a dad next spring".

He had then apologized for not being able to inform fans of the news at an earlier date but explained that it was because his fiancee is not a celebrity.

He has led a particularly successful career in Japan since debuting in the country six years ago, selling out all five of his concert tours held throughout the country.

Most recently, he has been both the director and racer of his own pro car racing team 'TEAM106', he set up entertainment company 'abnormal106' and turned producer for singer Rottyful Sky.

"Ryu Si-won says "will be faithful husband""
by HanCinema is licensed under a Creative Commons Attribution-Share Alike 3.0 Unported License.
Based on a work from this source