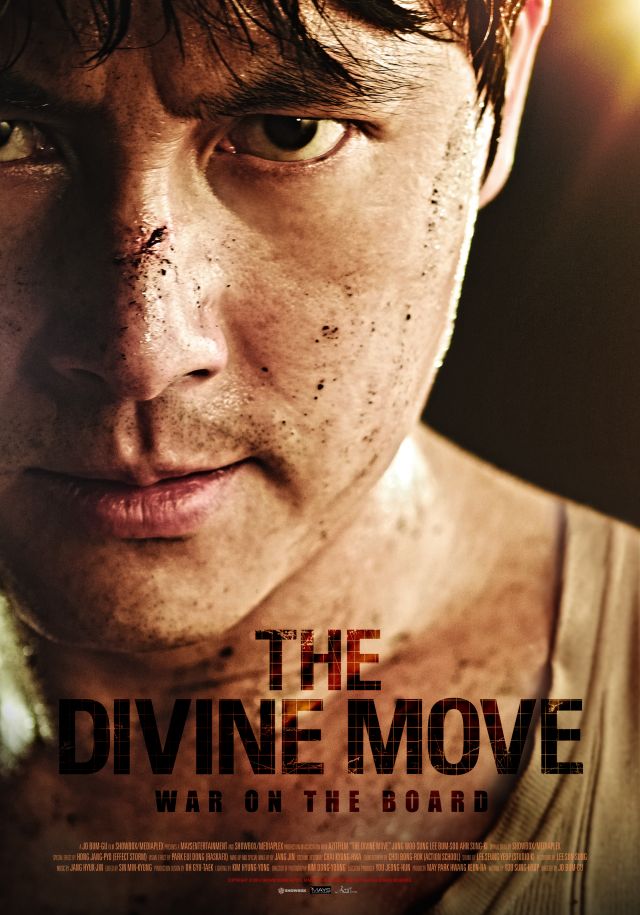 South Korea's highly anticipated gambling action film "The Divine Move" is set to be released in over 13 North American theaters on July 25th.

SYNOPSIS
Professional GO (a.k.a. baduk) player Tae-seok loses a high-stakes game to infamous underground gambler Sal-soo, and ends up framed for the murder of his own brother and locked up in prison. He vows revenge and trains ferociously. After serving his seven-year sentence, he gets in touch with his brother's former associate "Tricks", hermit and blind master player "The Lord", and skillful junkyard owner Mok-su; together, they begin formulating a plan to get back at Sal-soo and his men. Tae-seok slowly penetrates Sal-soo's inner circle and his gambling joint, and eliminates Sal-soo's men one by one. But Sal-soo discovers Tae-seok's true identity and engages him in one final game that will seal the fates of the two men involved.

"The Divine Move" offers the cinematic pleasure to the audiences with the mixture of gambling GO and the genre of action film.
GO has been regarded as the 'gentleman's sports' with a long tradition. But "The Divine Move" will enable the audiences to take the closer look at this still game as the film grafts it onto the genre of crime thriller. When the camera moves into GO clubs in corners of Seoul, the world that we couldn't even imagine unfolds. It's the place where the new level of GO is going on with high tech surveillance and high bets of millions.
GO is more like battle of wits than other gambling such as games of poker or hwatu (flower cards). There is even saying "the GO masters are seldom caught by the police" meaning that GO requires wisdom and judgment. Dealing this intellectual game, "The Divine Move" boasts the perfect combination of the intelligence, crime and action. Director and the whole crew put the realistic details of GO as they got the supervision from the Korea Baduk Association: from the way each character puts the stone based on their different characteristics, touches the stones to the GO terms used in the film. In addition to this, Korea's best actors portray experienced players who read the opponents' moves from the distance of 45cm of GO board.
"The Divine Move" puts the weight on the resolution of the players who are willing to throw away their own lives for the one big match, which makes the film a roller coaster ride from beginning till end.

In "The Divine Move", seven best actors boast their talents.

Jung Woo-sung is the one of the best actor who can carry out the action gracefully and effortlessly. He has been proving this in many of his films: from "Beat" through "The Good, the Bad, the Weird" to "Cold Eyes". Jeong is even regarded as the best actor on action scenes in Korea. This time in "The Divine Move", he plays the ex­professional GO player who risks his life for the revenge. With this film, Jeong portrays the perfect action hero with detailed action that only he can do.

Facing Jeong, Lee Beom-soo will play Killer, the villain in nine years since "The City of Violence". With this role, Lee shows off all his energy and acting skills. Lee's charismatic gaze which overpowers the opponents adds the tension to this action film.

Veteran actor, Ahn Sung-ki shows his different aspect playing the blind man for the first time in his acting career. His new challenge teems with radiant as he actually learned the skills of GO for the blind.

Kim In-kwon whose roles with a prickly wit in numerous box office hits shines off in this film again. His role, Cheater is the one who does the gambling GO for his survival. Kim would give the rooms for the audiences to laugh during this highly tensed crime action film.

The only female role of Navel is to be played by Lee Si-young. Navel who once was an aspiring professional GO player turned herself into the gambling scene working for Killer now. Playing this role, Lee shows off her presence among the strong male actors.

Ahn Kil-kang plays Carpenter, the technician who lost one arm because of the gambling GO.
Ahn's strong presence and portrayal of the inner self adds the layer to this film.

Last but not least, Choi Jin-hyuk adds the spectacle to this film. The upcoming youngest actor of these enpersonates Player who controls the gambling GO club and bets and takes on Jung Woo-sung.

Actors spent months in training to make the action their own. Especially Jung Woo-sung, Lee Beom-soo and Choi Jin-hyuk carried the strong action sequences without stunts.

The action sequences in "The Divine Move" make the big step up from other action genre films adding the variety and pleasure in every sequence.

First of all, Jung Woo-sung does wonders in action with his physical strength and incredible speed. His spectacular action sequences expand the limits in Korean action genre. Especially in the action sequence in the prison would leave the strong impression in audiences.

Lee Beom-soo puts the color on his character with restraint but cold­hearted action. Lee completes Killer character who uses daggers to strike the vital point at once with his deep understanding of the character. Thanks to his charisma, Killer faces the character of Tae­seok in even terms well contrasted with each other.
Last but not least, the youngest Choi Jin-hyuk's challenge can be the announcement of the new action star in Korean film. Choi's perfect body proportion makes his detailed action more eye­catching. Choi even faces Jeong evenly in strong action sequence in freezer.

"The game hasn't started yet. You messed with the wrong person".

Tae­seok was a professional GO player but got involved in a gamble because of his brother. He lost his brother due to a false move that he put fooled by Killer. And Tae­seok got falsely accused for killing his brother and serves his time in jail. He thirsts for revenge for Killer's gang in prison. By the time his enemies think he's long dead, he gets out of prison and schemes the biggest play for revenge and recruits with all the master players of GO for his vengeance squad.

Jung Woo-sung | Master of action
Debuted in 1994, Jung Woo-sung has shown exquisite acting skills in action films such as "Beat", "The Good, the Bad, the Weird" and very recent Cold Eyes. One of the top action choreographers in Korea, Jeong Doo­hong praised that Jung Woo-sung's performances in action films have matured over times. Other than action films, Jeong has shown a wide spectrum of acting throughout his 20 years' of acting career and has been positioned as one of the most established and bankable actors of his generation. His presence on screen has gotten stronger since his earlier days. In "The Divine Move", he shows off again his diverse techniques of veteran actor in the versatile action scenes as well as strong dramatic moments.

The ultimate villain in the world of GO gambling: Killer

"One false move can lead you to death".

He gets enraptured to torture the opponent by all means. He's the best player in GO gambling and is cruel enough to mercilessly kill whoever he beats in the game. He has a large number of GO clubs all over Seoul, and manipulates all the games using the players who work for him. As nasty and vicious as one can get, Killer calmly welcomes Tae­seok's revenge as if he's long anticipated it.

Lee Beom-soo | Actor of intense eyes
Lee Beom-soo begun his acting career on stage and later stood out with his strong presence both on small and big screens. He returns as villain in a movie in nine years after he incarnated a brutal betrayer in "The City of Violence" and once again completes his mission to be under the skin of another vicious character, who's a combination of well restrained action, cool­headed charisma and cruelty. Lee Beom-soo was so engaged in his role and he was the one who came up with the idea of painting all the tattoos on Killer's body to better express the character. His excellent interpretation as a perfect villain makes the contrast between the good (Tae­seok) and the bad (the killer) even more clear in the movie.

"The world is a playground for a master but a hell for a low rank".

He was once an infamous sharper in GO gambling, but lost his sight by a wrong move. He now spends his time playing GO with the old people on the street betting on petty dimes and cannot pass a day without drinking. He accepts Tae­seok's offer for his daughter and becomes the mentor for Tae­seok's squad, building a special friendship with Cheater (Kim In-kwon).

Ahn Sung-ki | Veteran actor as the central axis of the cast
Ahn Sung-ki, the veteran of the veterans in Korean cinema has devoted himself in acting after he debuted in 1957 as child actor. The living witness of Korean cinema's history, Ahn adds the depth and weight on the cast of "The Divine Move" like no other actor could do. Believe or not, this was his first time to play a blind man throughout his long and prolific career. Also, his transformation as a drunken old man was so real, not many people on the street could recognize this household name's face during the shoot. He's also widely respected by the actors of younger generation; Kim In-kwon said, 'It was worth joining "The Divine Move" just because the film gives me the chance to work with Mr. Ahn'. Ahn Sung-ki completes the excellent interpretation as blind GO master by flawlessly delivering various GO terms and blind GO skills.

"I just wanted to expand the limit of action spectacles of Korean cinema".
Jo Beom-goo

In GO, there exist various dramas as it is called as microcosm of the life. However, because of its nature of stillness, not many people attempted to portray this on a big screen. But "The Divine Move" started with this idea of grafting the world of GO onto action from the development stage. GO and action have the common point that both bet life and death one in mental aspect and the other in physical fight. So the film started with the idea of telling a story of the perfect fight in the level of mental and physical.
The film is truly blessed to have all these actors and actresses who fit the characters. As a director, I was more than thrilled to see them giving off their charm in front of the camera. I hope the audiences would enjoy the film which will tell the various stories in the spectacular city of Seoul.