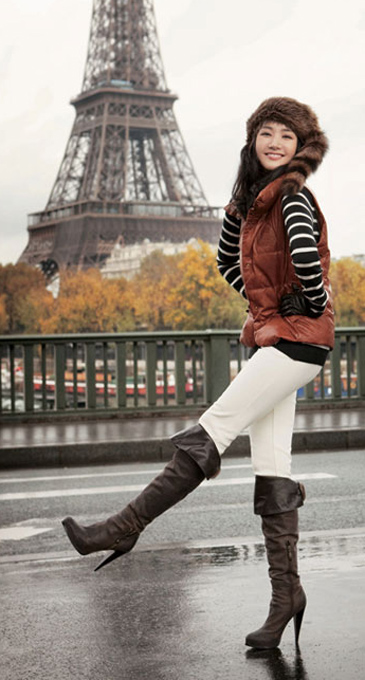 The South Korean actress and model Park Min-young is featuring on December issue of South Korea's local Ceci magazine. The above photo was taken in Paris.

Park was born on March 4, 1986. She is a graduate of Dongguk University

Park has recently appeared in the photo shoot for the fashion brands.

She revealed her glamorous body in a recent photo shoot for lingerie brand "Solb".

The actress had hidden away her womanly charms by wrapping them up for her cross dressing role in "Sungkyunkwan Scandal", and finally received an opportunity to let loose her sexiness through a lingerie photo shoot, immediately captivating her fans.

The white dress shirt she's wearing plays on the romantic fantasy of almost every male, and the peek at her cleavage adds to the overall lovely effect of the photo shoot.

The head of advertisement at "Solb" commented, "We decided that Park Min-young was the most fitting model for our modern, simple, and sexy lingerie line. She's been known for her innocent image, so we wanted to express a sexier side of her by choosing her as our model".

Fans commented, "She always wore traditional clothing in her dramas, I had no idea she had such a glamorous body", and "Her innocent face and voluminous body is eye-catching".

The full advertisement cuts will be released by the end of the month.

She also transformed herself into a lovable "unbalanced girl" for Korea's "Vogue Girl".

For their January issue, Park Min-young channeled her playful "High Kick!" character, 'Yoomi', for the photoshoot.

The actress is seen showing off her quirky side with her mismatched outfits. In one photo, she's dolled up in a white wedding dress with a denim jacket half on; in another photo, she is dressed in casual attire, cutely accessorized with a wedding veil.

Despite having to work for five hours straight, Park Min-young exhibited her professionalism by keeping a bright personality and managed to impress both the photographer and on-set staff.

The photos make her seem like a lovable, eclectic dork. We love it!

"S. Korean Actress, Model Park Min-Yeong"
by HanCinema is licensed under a Creative Commons Attribution-Share Alike 3.0 Unported License.
Based on a work from this source