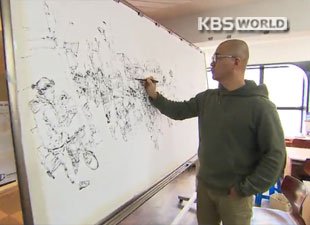 South Korean cartoonist Kim Jung-gi is gaining popularly around the globe for his artistic skills to draw large-scale pictures on the fly.

When asked to draw a scene from everyday life, Kim begins without hesitation or preparation.

In just two hours, Kim fills a wall-sized sheet of paper with various aspects of peoples' everyday life, such as a couple on a street and a child with a puppy.

A video clip showing his impromptu drawing has attracted hundreds of thousands of hits on YouTube.

He has been invited to draw in foreign countries, including China, France and Russia. Orders for his sketch collections are pouring in from overseas.

Kim has been asked to work on a cartoon in France. He is also scheduled to deliver a lecture and hold an impromptu drawing show in Spain next month.
Reported by KBS WORLD Radio Contact the KBS News: englishweb@kbs.co.kr

"S. Korean Cartoonist Draws Global Attention"
by HanCinema is licensed under a Creative Commons Attribution-Share Alike 3.0 Unported License.
Based on a work from this source