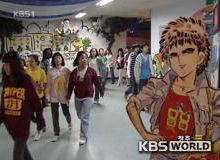 The sales of South Korea's cultural contents industry stood at more than 72 trillion won in 2010, a five-point-one percent jump from the previous year.

According to the Ministry of Culture, Sports and Tourism, the number of employees working in the cultural contents industry grew by over ten-thousand year-on-year to 532-thousand last year.

The cultural contents industry includes the production of games, animation, movies and music.