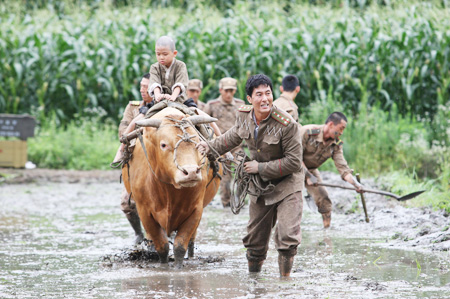 Not too long ago one would have been charged with treason for portraying a North Korean in a sympathetic light onscreen, let alone having characters "sleep with the enemy".

But one need not go as far as retro propaganda films. In modern Korean cinema, works such as "Welcome to Dongmakgol" (2005) haved paved new possibilities for entertainment inspired by the Korean War (1950-53) - showing it can be funny and not be limited to tragic melodrama or bloody action.

"In Love and the War" (working title) aspires to achieve similar tragicomic ends, by casting a bunch of comedians and giving it a romantic spin.

But it fails miserably as it resorts to schmaltzy, manufactured formulas. It's a shame because it was inspired by real events and does feature truly poignant moments and flashes of brilliance, only to have a tide of fake tears drown them out.

The movie takes viewers to a remote village called Seokjeongni. Compared to "Dongmakgol", Seokjeongni is better connected to the outside world, and residents manage to learn that North Korean troops have invaded the South via the chief's radio. Normalcy nevertheless continues for the villagers, who are all preoccupied with more pressing matters: a wedding.

Just a few days before the ceremony the groom is forced to flee when news breaks that Northern troops are fast capturing cities and annihilating anticommunist activists. Jung Ryeo-won, as always, shows off a sweet, disheveled naturalism as Seol-heui, who has no time to brood over her missing fiance. North Korean troops arrive in town and announce their holy mission to "liberate" the Southerners.

As the chief's granddaughter and town's only schoolteacher, Seol-heui must remain strong - but instead of resisting the unwelcome guests she joins the town's intricate survival scheme and zealously embraces the Marxist teachings. Hot-tempered widower Jae-chun sees Yoo Hae-jin offering his usual ingenious eccentricities and his dumb-and-dumber sidekick, the quiet yet clever Baek (Kim Sang-ho), and even Seol-heui's unassuming grandfather (Byun Hee-bong) manage to feign unwavering loyalty.

So far so good, with lively, endearing characters spicing up the sequences. The slapstick peaks with witty political undertones, when a rivalry ensues between Seokjoengni and a neighboring village to host the construction of a bomb shelter under the soldiers' supervision. The fervid lobbying of the townspeople makes even PyeongChang's bid to host the Winter Olympics today look rather meek.

Meanwhile, the troop's officer, Jeong-ung, is propelled by an ulterior motive. Kim Joo-hyuk plays yet another perfect gentleman, this time embarking on a mission that is not only politico-military but also romantic. He wants to find the charming young girl he met a dozen years ago, when Korea was one country.

What begins as a facade, however, develops into genuine feelings among people who would have been neighbors if it hadn't been for geopolitics. Hints of love also blossom, not surprisingly, between Jeong-ung and Seol-heui – but the peaceful coexistence proves all too fragile amid the realities of war.

Director Park Geon-yong, who made a promising debut with the heartrending sports drama "Bronze Medalist", should have let the order of events fall naturally into place. Instead, the film tries to force viewers to shed tears by smothering them with unnecessary subplots and details, as well as sappy scores and lines.

These flaws do not completely dismiss the film's ideals - how humanitarian values prevail easily over ideological differences and the importance of peace and freedom. But the movie, quite ironically, becomes the sort of audiovisual autocrat that many mainstream films are guilty of.

In theaters April 28. Distributed by Showbox/Mediaplex.

One-and-a-half stars out of four.

"Sappy drama muddles Korean War comedy"
by HanCinema is licensed under a Creative Commons Attribution-Share Alike 3.0 Unported License.
Based on a work from this source