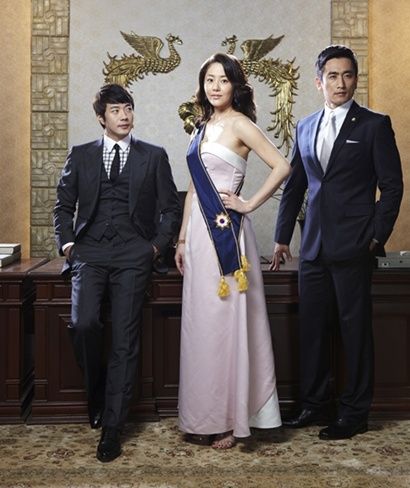 SBS drama "Daemul - Big Thing" has topped the Wednesday and Thursday prime time series slot for the seventh week in a row.

The average viewership rating for "Daemul - Big Thing" stood at 25.5 percent, about one percent higher than that of last week, according to the survey of Total National Multimedia Research (TNmS).

AGB Nielson Media Research also reported a slight improvement for the show, yielding an average mark of 26.9 percent for this week.

The drama, starring top Korean actress Go Hyun-jung and actor kwon Sang-woo, revolves around how the nation gives birth to its first female president amid political schemes and scandals.

KBS detective story "The Fugitive Plan B" which came next, scored ratings of 14.3 percent on TNmS' poll and 13.9 percent on AGB's poll for Monday alone, respectively.

Its Tuesday episode got pushed back to next week and the China versus Korea match for Guangzhou Asian Games' female basketball game aired instead.

Its Tuesday portion got rescheduled to next week as well due to the airing of the Guangzhou Asian basketball game.

"SBS drama "Daemul - Big Thing" rules Weds & Thurs for 7th week "
by HanCinema is licensed under a Creative Commons Attribution-Share Alike 3.0 Unported License.
Based on a work from this source