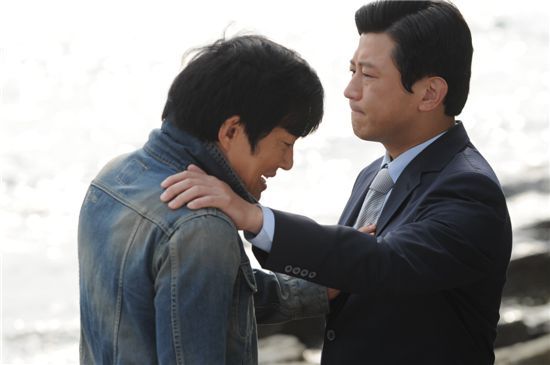 According to data by Total National Multimedia Statistics (TNmS) on Wednesday, "Giant" posted an average viewership rating of 30.45 percent to remain the most-watched show for Mondays and Tuesdays prime time drama this week.

The epic drama starring Lee Beom-soo, Park Sang-min and Hwang Jung-eum, depicts on the harsh business world of the 70s and 80s through the lives of three siblings, separated when young but reunited later to avenge the death of their father.

Statistics by AGB Nielson Media Research yielded an average rating of 29.5 percent for the show this week.

MBC drama "Queen of Reversals", which came second on TNmS' chart, marked an average rating of 9.2 percent, about a two percent drop from last week while AGB showed the series scored an average mark of 11.4, a decline from last week's 14 percent.

The drama about a husband (Jung Joon-ho) and a wife (Kim Nam-joo) trying to balance work and married life has been on and off the two-digit range for the past few weeks.

KBS series "Marry Me, Mary!", staring Moon Geun-young and Jang Keun-suk, came in third, with ratings of 7.1 percent and 7.8 percent on TNmS and AGB's polls, respectively, on Monday.

The drama about a double contractual marriage between a girl and two men, was cancelled on Tuesday and replaced with the broadcaster's special coverage on North Korea's unexpected shelling of South Korea's Yeonpyeong Island.

"SBS drama "Giant" remains on top eighth week in a row"
by HanCinema is licensed under a Creative Commons Attribution-Share Alike 3.0 Unported License.
Based on a work from this source