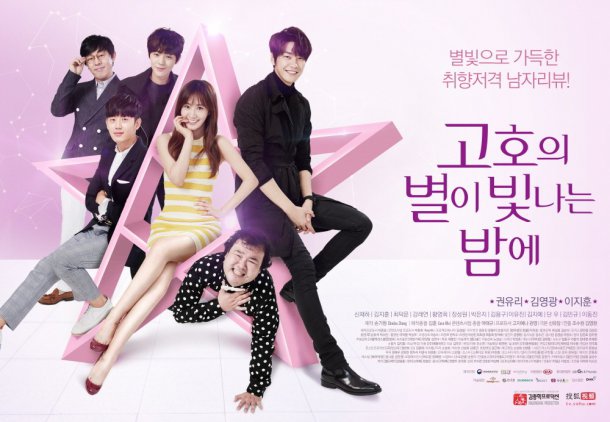 While "Go-ho's Starry Night" is being scheduled for the weekends on SBS, it's already been viewed over 10 million times in three weeks in China.

"Go-ho's Starry Night" is a collaboration by Korea's Kim Jong Hak Production and China's Sohu Dot Com. Prior to release in Korea, the drama was released as a web-drama on Sohu Dot Com and Sohu TV.

We take a look at three driving forces that allowed "Go-ho's Starry Night" to be re-exported to Korea.

- Producer Jo Soo-won, someone we can trust with his delicate production ability

One driving force that led to re-exportation in to Korea is producer Jo Soo-won's abilities. Jo Soo-won is famous for his work in "I Hear Your Voice", "Pinocchio" and others. "Go-ho's Starry Night" was also highly anticipated.

Apparently, he did it again. He didn't miss a single background and added CG in all the right places and times for visual pleasure and it was enough to make the Chinese regional fans go crazy.

- Romance and comedy where they belong, not a second to be bored

"Go-ho's Starry Night" is a romantic comedy that has a little bit of romance and comedy. The romance revolves around Go-ho (Kwon Yuri) and her office while two men who fight over her cause some comic situations.

"Go-ho's Starry Night" is based in an advertisement company and it deals with situations that are likely to happen in real life and reflects on the psychological state of the characters.

- Personality is a plus, the cast perfect for their roles

The cast played a big part in the ex-exportation of "Go-ho's Starry Night". Kwon Yuri takes on the role of Go-ho, an employee in an advertisement company. She blends perfectly with her role with the perfect balance of boldness and cuteness.

Kim Yeong-gwang is Kang Tae-ho, the team manager of the company but is bad tempered. He bullies Go-ho all the time but actually on the inside, he adores her.

Meanwhile, four episodes of the SBS weekend drama "Go-ho's Starry Night" starts on the 22nd of October at 9:55PM.

"SBS Special Drama "Go-ho's Starry Night" "
by HanCinema is licensed under a Creative Commons Attribution-Share Alike 3.0 Unported License.
Based on a work from this source