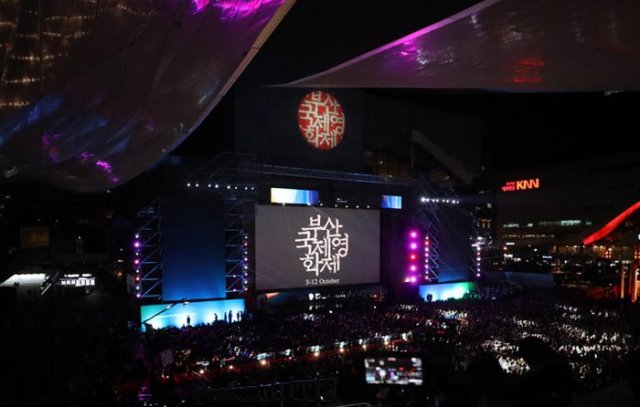 Visitors pack the opening ceremony of the Busan International Film Festival in the southern port city on Thursday. /Newsis

This year's Busan International Film Festival kicked off its 10-day run on Thursday.

The annual festival, which is marking its 24th year, is being held in the southern port city until Oct. 12.

Events scheduled for the eve of the festival were canceled due to Typhoon Mitag, but the weather cleared the next day for a perfect opening.

The festival opened with a screening of "The Horse Thieves. Roads of Time", directed by Yerlan Nurmukhambetov from Kazakhstan and Lisa Takeba from Japan.

Korean films opened the festival for the previous four years, but this year the foreign film was selected, probably with the aim of boosting the fest's diversity.

The film tells the story a woman whose husband has been killed by horse thieves.

This year's festival features 299 films from 85 countries, down from 323 last year.

While the festival does not draw famous global stars or glitzy premieres like some others do, there are still plenty of films on offer to excite movie fans. There are also several films that received a lot of buzz after screening at major film festivals like those in Berlin, Cannes and Venice.