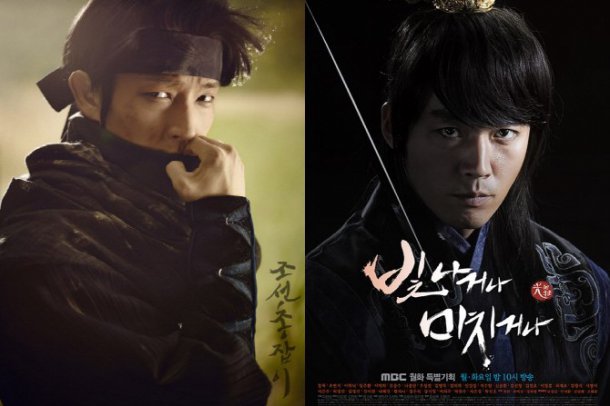 Lee Joon-gi takes on the role of Wang So, the fourth emperor of the Koryeo. Wang So is also known as the 'Wolf Dog'.

Jang Hyuk also played Wang So in the previous MBC drama "Shine or Go Crazy". The two dramas are based in the early Koryo times, during the time when Wang So was a real character.

The two dramas are of course, fictional. "Shine or Go Crazy" was about the romance between Wang So and Princess Sin Yool, the last princess while in "Scarlet Heart: Ryeo", Wang So falls in love with a 21st century woman. Hae-soo is a woman from the Koryeo times who goes into the body of this woman.

However, Wang So was a real character so there are similarities between the two Wang Sos. Wang So from "Shine or Go Crazy" was described as the 'cursed emperor' as he was foreseen to turn the Koryeo into a blood bath. He struggles alone as he tries to hide that he is a prince. In "Scarlet Heart: Ryeo", Wang So also keeps himself hidden behind a mask.

"Scarlet Heart: Ryeo" Wang Wook and Wang Yo, played by Kang Ha-neul and Hong Jong-hyun, were played by Lim Ju-hwan and Ryu Seung-soo in "Shine or Go Crazy".

""Scarlet Heart: Ryeo" Lee Joon-gi fights with Jang Hyuk"
by HanCinema is licensed under a Creative Commons Attribution-Share Alike 3.0 Unported License.
Based on a work from this source