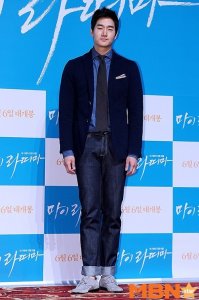 Some are fascinated with his perfect body. Everyone who meets him talks about his eyes -- small but deep, sparkling with a powerful aura.

Actor Yoo Ji-tae(31) is both calm and passionate. Yoo, one of the nation's top stars, is working in a small theater while his colleagues appear on TV. His quiet but logical words are his trademark.

As soon as he finished shooting the movie "Hwang Jin Yi" about a Chosun-era gisaeng (a female entertainer) with actress Song Hye-kyo, Yoo chose to work on the stage. His movie career is different from that of other screen stars. Yes, he is the celebrity star who appeared in the hit movie "Old Boy" by Park Chan-wook. But Yoo produces and directs his own films -- unprofitable short ones. He also established a theater to put on one play a year. Almost all the money for the theatrical productions comes from his own wallet.

"Producing a short film or a play can feel masochistic. I'm always unsatisfied with my work and complain about myself. I'm slow and I make a lot of mistakes. I think I can express my true self if I keep going, even if I'm moving as slowly a turtle. That's why I'm creeping", Yoo said. He's not in the same position as most theatrical actors, but he doesn't look like a top star on the stage. So why is he so attached to the theater?

"I graduated from an acting school. I've had a strong affection for movies and plays since I was young. I worked as a part-time model before making my debut as an actor. Now I'm called a model-turned-actor, but that's not important. I work on stage because it's there that I find the challenge and the stimulus an actor needs through continuous creative work. Other theatrical actors probably have their own reasons to continue to work on stage", he said.

The play "Come to the Ghost House" is not a horror story or thriller. It's the story of a mother's grotesque but desperate love for a daughter who suffers from leprosy. The mother gives birth to another child to give her leprous daughter the new liver. The story has forced Yoo to ponder the questions of motherhood. "When I was young, my mother stuffed me into a small seat on a very crowded subway train. I was ashamed and thought, 'Why is she treating me like a bad boy?' I didn't understand that was the way she loved me", Yoo said.

It's well-known that Yoo had a difficult childhood with his single mom who worked as a nurse. "I respect my mother. She gets up at 5 a.m. and exercises everyday before going to the hospital. She works until 7 p.m. and goes to bed at 10 p.m. It's been her 30-year habit. She's a strong woman", the actor said.

Yoo's own dreams are the same as those of many ordinary people. "I want to be financially comfortable and compensated for my tough childhood. I have bad memories about the hardships of my childhood", he said. As a screen star, Yoo has been recognized for his consistently solid performances, but on stage, he truly shines.