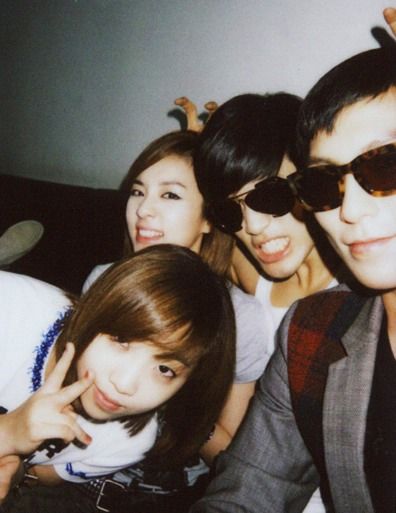 Korean pop singer Se7en, who recently made a comeback to the local music scene, has revealed a photograph he took with YG labelmates Sandara Park and Minzy of girl band 2NE1 and T.O.P.(Choi Seung-hyun) of idol group Big Bang.

Se7en posted the picture on his Twitter page (http://twitter.com/OFFICIALSE7EN) on Wednesday, along with the comment "Dara, Mingky [referring to Minzy] and Tee-op-hee [T.O.P.] who came to cheer me on last week at [Se7en's] first television performance!! Thank u so much~!! love yall~~~".

Fans have left over 260 comments about the photo including "I love YG family!!! so friendly!!", "YEY! TOP Dara Minzy and Se7en ^_^ Love this pic :D", "eeeeeeee i feel the love <3<3" and "Congratulations on winning in the M! Countdown~~ Oppa you're the best! ^^ Congratulations!"

Se7en, whose real name is Choi Dong-wook, trained under YG Entertainment for four years before making his debut in 2003 with the album "Just Listen". He became popular throughout Asia, releasing four full-length albums in Korea and seven singles in Japan.

In 2006, he went over to the U.S. to break into the global music scene and started collaborating with noted record producers such as Rodney "Darkchild" Jerkins. Although he has yet to achieve notable success there, the singer recently explained that his foray into the American pop market was "not a failure".

Se7en unveiled his mini-album "Digital Bounce" on July 21, his first record release in Korea since 2006's "Se7olution", and is currently promoting the single "Better Together".

"Se7en cheered on by 2NE1, Big Bang members "
by HanCinema is licensed under a Creative Commons Attribution-Share Alike 3.0 Unported License.
Based on a work from this source