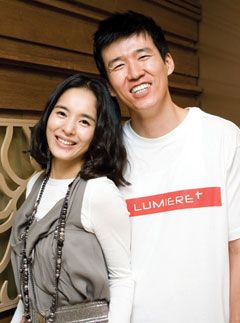 Sean and Jung Hye-young, a couple known for their charitable donations, have given W100 million they made from appearing in an advertising together to a convalescent home for patients of Lou Gehrig's disease (US$1=W1,135). The couple visited the Clinical Research Institute at Seoul National University Hospital in November last year to deliver the money and ask for construction of a care home for patients with the disease also known as amyotrophic lateral sclerosis.

"I'm proud that my husband agreed without a second's hesitation to the idea of donating this money", said Jeong. "He said nothing about the money we earned from the advert for three months after we shot it. When we'd appeared in another ad together early last year, he immediately suggested to me that we donate that money, but this time he didn't. I have to admit I was relieved thinking we'd be able to save the money for the family this time. But after meeting a friend of mine, I changed my mind. My friend told me that she never cut down on regular donations even during difficult periods, because there must be people who are struggling harder. I told Sean the story and about donating the W100 million from the advert we shot together. He said okay instantly".

Sean and Jeong have been notably active in charity and voluntary work for needy people, including annual donations to celebrate their children's birthdays and their wedding anniversary. "It's impossible for one person to help the needy. We decided to make our donations public to encourage others to participate so that more people can benefit", the couple said.