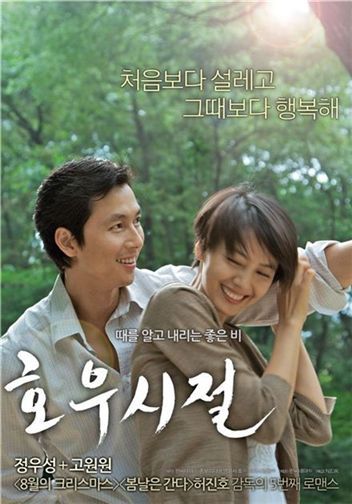 Korean film "Season of Good Rain", starring Korean actor Jung Woo-sung and Chinese actress Gao Yuanyuan, has been selected as the closing film for a Korean film festival to be held in Los Angeles next month.

Main features to be screed at the fest include "A Million", "Memories of Murder", "The Naked Kitchen", "The Righteous Thief" ("Descendants of Hong Gil-dong"), "The Scam", "Secret - 2009", "The Sword with No Name" and "White Night" while three films by director Ryoo Seung-wan will show in as part of a special segment focusing on the filmmaker.

Films such as "Breathless", "Daytime Drinking", "Members of the Funeral", "The Pit and The Pendulum", "The Room Nearby" and "Rough Cut" will be shown in the category of 'First Directors' Pieces' which focuses on pictures by new directors.

Chang Wha-chung, famed director and one of the pioneers of the Asian action genre, is the director of the ceremony.

""Season of Good Rain" to close Korean film fest in L.A."
by HanCinema is licensed under a Creative Commons Attribution-Share Alike 3.0 Unported License.
Based on a work from this source