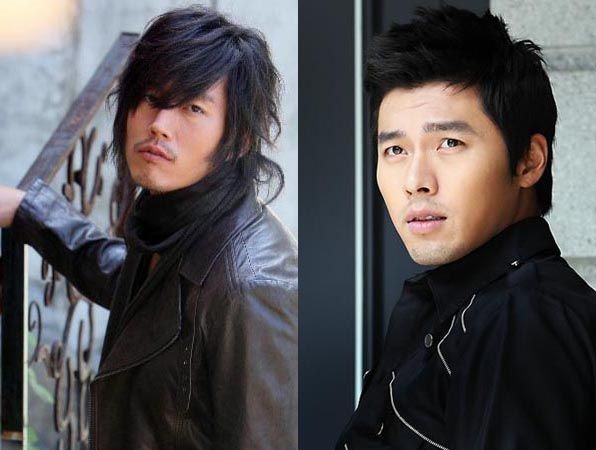 Interesting (and confusing) news: Jang Hyuk may be dropping out of the fantasy-melodrama series "Secret Garden", and co-star Kim Sa-rang may follow him out. Being touted as a potential replacement is Hyun Bin. And the reason for all this sudden cast rearrangement: idol star Jay Park?

"Secret Garden" is being planned as an SBS weekend drama to premiere in November, following "Life is Beautiful". It comes from the writer and director combo behind "Lovers in Paris" and "On Air", Kim Eun-sook and PD Sin Woo-cheol. Other cast members are Ha Ji-won ("Haeundae") and Yoon Sang-hyun ("My Wife is a Superwoman"). Former 2PM leader Jay Park was purported to be be making his drama debut in this project.

Here's where things get murky:

Jay Park's involvement has grown unclear, and some rumors say he is out, while others say that it's not yet decided. Now reports are circulating that both Jang Hyuk and Kim Sa-rang are looking to quit. All three are managed by the same company, Sidus HQ. Speculation: is this some sort of power play Sidus is trying to pull? Are they using their big stars as leverage to secure a high-profile project for their new singer-turned-actor client?

A Sidus HQ rep stated, "It is true there are problems regarding "Secret Garden", but it's not the time to say whether they will be quitting or not. We are continuing to discuss these matters with the production team".

Then came news that Hyun Bin, an early contender for the lead, is back in consideration. I had initially wondered with some suspicion if this was true, and whether the producers were trying to push back against Sidus by throwing out a big name. However, a source with Hyun Bin's management company confirmed that Hyun Bin received the drama's script "a few days ago" and is currently considering the role. Apparently he found the synopsis entertaining, but has not made any decisions.

And I can't see how he would possibly be considering the drama unless it were actually true that Jang Hyuk is close to leaving, which makes me very curious indeed...

"Secret Garden: Jang Hyuk out, Hyun Bin in?"
by HanCinema is licensed under a Creative Commons Attribution-Share Alike 3.0 Unported License.
Based on a work from this source