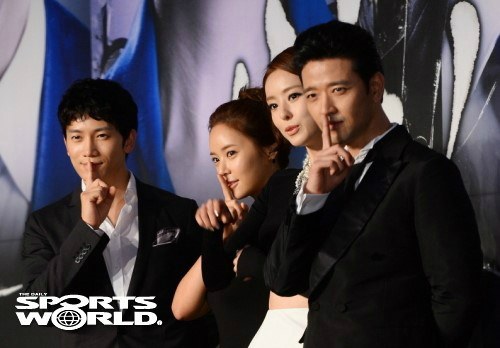 Hwang Jung-eum appeared at the premier of the KBS 2TV drama "Secrets" on the 11th in Seoul.

She said, "It is my wish to get married when I am on standing on the top of the hill". Questions about marriage were directed to her as Ji Sung and Bae Soo-bin have weddings coming up on the 14th and the 27th.

She said, "I want to get married when I am at the top. I need this drama to hit the record amongst all the dramas I've been in. SBS "Giant" recorded 40%".

Netizens say, "Was she envious of Ji Sung?", "I wish she succeeds" and more.

Meanwhile, new KBS 2TV drama "Secrets" is about the destructive love between four men and women; Yoo-jeong (Hwang Jung-eum) who throws herself at Min-hyeok (Ji Sung) who chooses promised marriage, Do-hoon (Bae Soo-bin) knows nothing but Yoo-jeong and Se-yeon (Lee Da-hee), Min-hyeok's fiance. To be aired for the first time at 10PM on the 25th.

""Secrets" Hwang Jung-eum, "We're aiming for 40%""
by HanCinema is licensed under a Creative Commons Attribution-Share Alike 3.0 Unported License.
Based on a work from this source