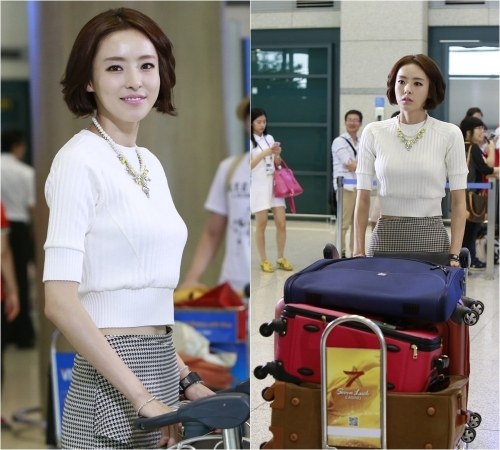 Lee Da-hee stars in the upcoming KBS 2TV drama "Secrets" as elite woman Sin Se-yeon and she appeared at the airport with minimal clothes.

Lee Da-hee is walking out of the airport with her hands full of luggage in the picture. She is wearing a knitted, checkered shirt which reveals her midriffs slightly with a white-tone necklace to stand out.

Lee Da-hee is a former model and she revealed her feminism and volume by wearing this outfit.

"Secrets" production says, "Lee Da-hee's character of Sin Se-yeon is something worth waiting for and Lee Da-hee's having a great time acting her out".

Netizens say, "No one can catch up with those legs!", "She's like a white lily", "I hope the drama is successful", "Only Lee Da-hee would pull this off" and more.

"Secrets" is about a man who falls in love with the woman who kills his lover. Starring Ji Sung, Hwang Jung-eum, Bae Soo-bin and Lee Da-hee, "Secrets" will be aired on the 25th at 10PM.

""Secrets" Lee Da-hee's airport fashion"
by HanCinema is licensed under a Creative Commons Attribution-Share Alike 3.0 Unported License.
Based on a work from this source