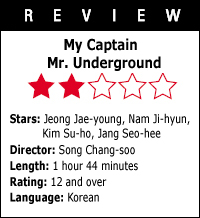 
Jung Jae-young is probably best known for playing testosterone-driven, angst-filled soldiers in the recent hits "Silmido" and "Welcome to Dongmakgol". But he's also quite adept at breathing humanity into losers and oddballs from society's margins _ characters you wouldn't normally associate with the tough-looking actor.

Jeong's forays into the weird have had varying degrees of success. It worked great in the wonderfully off-kilter Romantic Comedy "Someone Special", while failing miserably in the aimless low-budget "So Cute".

Jeong plays a penniless, antisocial tomb raider named Tae-chul, who steals a precious Buddhist statue from an archeological dig. While trying to hide the statue in an underground location, Tae-chul meets up with two odd little kids _ an orphan girl named Chi-min (Nam Ji-hyun) and a vampire boy named Pyong-o (Kim Soo-ho). When the vampire boy steals the statue from its hiding place, Tae-chul pretends to be a secret agent in order to find the relic.

One thing leads to another and the trio find themselves running from corrupt cops and gangsters. Predictably enough, Tae-chul's tough guy demeanor begins to melt as he spends more time with the kids. Though not terribly exciting, it's still sweet to watch the interaction in the scenes between Jeong and the two child actors, who are both very cute in their roles.

Aside from the children's appeal, Jeong makes "Mr. Underground" bearable with a consistent performance throughout. One of the highlights is near the end of the film, when the actor's portrayal of desperation transforms what could have been a hackneyed scene into an emotionally engaging one.

Unfortunately, fine acting can't save "Mr. Underground" from its predictable plot, which seems more suited to the realm of television dramas than the big screen. In fact, if the story were a little more developed, it probably would have made a pretty good miniseries. Instead, we're left to grapple with a rather bland feature film.

"Sentimental Plot Sinks "Mr. Underground""
by HanCinema is licensed under a Creative Commons Attribution-Share Alike 3.0 Unported License.
Based on a work from this source