Seolhyun steals the spotlight...Jo In-sung's friend is crazy about her 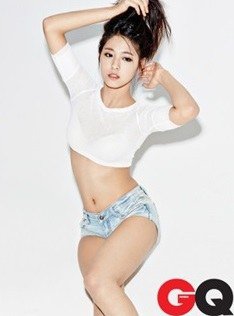 She's only 20 years old but she's already been seen in various TV shows and latest flick "Gangnam Blues". AOA's Seolhyun has got an innocent face with a body like a model.

Meanwhile, there's an actor who mentioned her out of interest.

Kim Ki-bang appeared on the SBS Power FM "K-Will's Young Street" and said he was head over heels for Seolhyun.

Kim Ki-bang is close friends with Jo In-sung and has been seen on TV shows with him.

Kim Ki-bang featured on the radio show with Choi Wooshik and said there's someone he fancied these days.

When everyone asked who it was he said AOA's Seolhyun and the radio crew made a surprise phone call to her for him.

After the call, he said, "I love this radio. Call me again when AOA is here. I will drive myself over here if I have to".

Netizens say, "Seolhyun should be close to Ji-min and Cho-ah", "She was pretty in "Gangnam Blues"", "She's attractive" and more.

"Seolhyun steals the spotlight...Jo In-sung's friend is crazy about her"
by HanCinema is licensed under a Creative Commons Attribution-Share Alike 3.0 Unported License.
Based on a work from this source