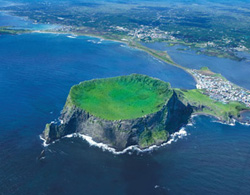 Jeju Island's Seongsan Sunrise Peak ranked No. 1 on a list of "50 beautiful places to visit in Korea" by CNNGo, the 24-hour news channel's Asian culture website.

According to the Jeju provincial government, the list also includes the Seopjikoji promontory, Udo Island, Hyeopjae Beach and Mt. Halla.

"A UNESCO world heritage site, the [Seongsan Sunrise] peak is famous for many things, including numerous rare plant species, but is best known for the magnificent sight of the sun rising over it", the website said. "The scenery of Seopjikoji has also been captured by several Korean films and dramas", while on Udo Island, "visitors can hike on Olle road, or opt for a scooter ride along the shore, a submarine excursion or sea fishing".

It also described Hyeopjae Beach as "perfect for families with its shallow water, nearby amenities, and camping in the pine forest surrounding" it. The "fairytale sight of snowflakes and icicles covering tree branches on Mt. Halla was the inspiration for the Halla Snow Festival that is held in late January/early February every year", CNNGo added.

Jeju hopes the inclusion will further boost the number of foreign visitors to the island after it was chosen among the New 7 Wonders of Nature in November last year.

"Seongsan Sunrise Peak Claims Top Honor in Korea by CNNGo"
by HanCinema is licensed under a Creative Commons Attribution-Share Alike 3.0 Unported License.
Based on a work from this source