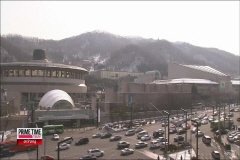 Back here in the nation

The Seoul Arts Center, which has served as the countrys most comprehensive cultural complex since its establishment in 1988 celebrates its 25th anniversary this year.

Our cultural correspondent Park Ji-won reports on how the center plans to mark 25 years of serving the public. The Seoul Arts Center opened its doors. to great fanfare on February 15th, 1988, as the nation's first major arts and culture complex.

Later, the center would add more spaces for visual and performing arts.

In 1990,.. the Hangaram Art Musuem and an arts library opened.

The Opera House opened in 1993 and its unique design, modeled after the shape of a traditional Korean hat, has since become a landmark for the center.

"And now,.. It has become Korea's premier venue for culture and the arts.

Last year alone, the center hosted over a thousand performances.. and some 130 exhibitions,.. and welcomed more than 2 million visitors".

Throughout its 25-year history, the arts center has contributed to broadening the cultural experiences of the Korean people.

It has hosted numerous performances by world-class musicians and performing arts groups, along with some of the best in visual art and design.

The center was also the first in the country. to introduce a series of brunch concerts, starting in 2004, that aimed to make the arts more accessible and accommodate viewers who couldn't attend evening concerts.

Since then, the brunch series has become so popular that other venues have adopted the idea.

"In celebration of the 25th anniversary, violinist Sarah Chang and the Bucheon Philharmonic Orchestra are performing a special concert to commemorate the occasion. We are also hosting a special exhibition highlighting the past 25 years in the center's history".

The center has planned a series of special performances and exhibitions throughout the year, such as the Korean World Star series featuring cellist Hanna Chang and soprano Sumi Jo.

"Seoul Arts Center Celebrates its 25th Anniversary"
by HanCinema is licensed under a Creative Commons Attribution-Share Alike 3.0 Unported License.
Based on a work from this source