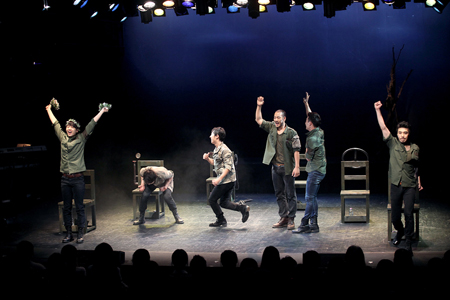 Actors perform in a scene of "The Goddess Is Watching" on Wednesday. / Courtesy of Seoul Musical Festival

Held at various venues of Chungmu Art Hall in central Seoul, the festival began on Aug. 6 with a variety of exhibits and lectures. The "Korean Musical History" exhibition is taking place on the first floor at Chungmu Gallery. Featuring selected costumes and photographs of homegrown works from famous "The Last Empress" to recent "Moby Dick", it runs through Aug. 19.

Yegreen Encore showcased five musicals - "Lee Chae", "The Goddess Is Watching", "Addiction", "Abboccato" and "Fly, Mrs. Park" - in development from Aug. 7-11. Producers as well as general audiences came to see the shows and selected which would be further developed. "The Goddess Is Watching" and "Fly, Mrs. Park" won the competition and received 100 million won funding for future production.

Academic programs included five conferences discussing issues such as how Korean musicals should make their way overseas and how to establish educational facilities for musical theater.

The final gala performance Monday was composed of two parts - the Yegreen Gala Show featuring the shows nominated for the Yegreen Awards and the SMF Gala Show of popular songs from homegrown musicals.

The Yegreen Awards is the first awards ceremony dedicated to homegrown shows. "I hope the SMF will be an international event to let the world know more about Korean musicals", said Song Seung-hwan, president of Korea Musical Theater Association, Monday.

Noh Woo-sung won the Best Book and Best Direction for "Sherlock Holmes: Secret of the Anderson Family" and Cho Gwang-hwa and Yoon Il-sang won for the Best Music and Lyrics. Jung Sung-hwa won the Best Actor award for his outstanding portrayal of Ahn Jung-geun in "Hero", while Cha Ji-yeon won the Best Actress prize for her role in "Seopyeonje".

The Yegreen Award, the grand prize which aims to commemorate the person or organization that contributed to the advancement of Korean musical the most, was given to Yun Ho-jin, producer of "Hero" and president of Acom International. Other candidates included CJ E&M, "Gwanghwamun Younga" and pansori performer and actress Lee Ja-ram.

The SMF is to be an annual event and the second SMF will be held next summer. For more information, visit www.seoulmusicalfestival.kr.