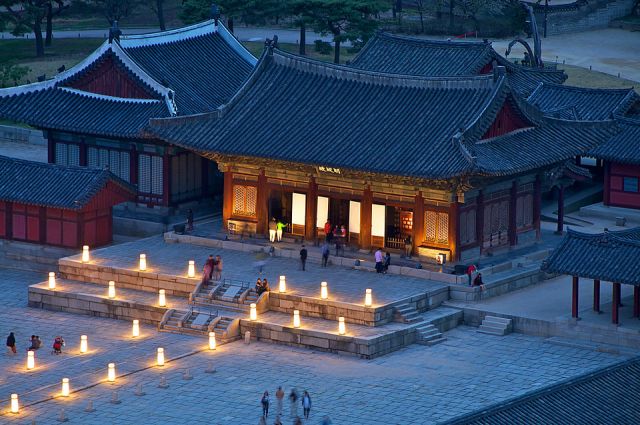 Traditional Korean lanterns lit simultaneously at Changgyeong Palace in Jongno district at 6:30 p.m. on October 1, 30 minutes ahead of its first nighttime opening this autumn. The lamps brightened up at the main entry Honghwa Gate to Myeongjeong Gate, and to Myeongjeong Pavilion. People lined up long outside at the ticket office to buy tickets.

A father visited the palace with this son, and pointed out to Myeongjeong Pavilion, saying, "This is where King lived". He said, "I work in Jongno but it is the first time that I visited Changgyeong Palace. I came here with my family to enjoy nighttime scenery and because I thought it would be a good history and cultural experience for my child". On the way east to the Chundangji Lake, couples were either walking hand in hand or with baby in stroller. The lights stayed bright on the pathways to the 6,400 square meter botanical garden located on the north of the lake.

People visiting Changgyeong Palace on Monday stayed in orderliness. However, some parked their cars in front of no-parking areas outside the palace. Thanks to visitor number restriction, there has been no case of injury or eating and drinking since October 1. A mother who came with her daughter said, "Last year when I came here, there were so many people and the place was so messy. Strictly limiting the number of visitors while extending the number of days for nighttime visit will surely help people appreciate the palace better".

Tickets can be booked online (through Auction website). The tickets for Changgyeong Palace were fully booked via Internet but 600 are still available on site. Tickets for Gyeongbok Palace will be available from 2 p.m. on Friday online but people can also buy them at the palace.

"Seoul's Changgyeong, Gyeongbok palaces open for nighttime"
by HanCinema is licensed under a Creative Commons Attribution-Share Alike 3.0 Unported License.
Based on a work from this source