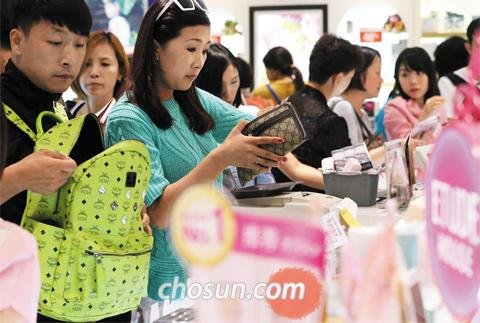 Seoul has emerged as one of the favorite destinations of Chinese tourists. The Beijing Youth Daily reported in early September that Korea and Japan were the top two destinations for Chinese tourists last year thanks to geographical proximity, citing a report from the World Tourism Cities Federation (WTCF).

Seoul attracted the greatest number of Chinese tourists among 126 member cities of the WTCF. Busan and Gwangju in Korea and Japan's Sapporo were also on the list. Chinese travelers mostly enjoyed visiting shooting locations of popular TV dramas and films during their visit.

The number of Chinese travelling abroad is expected to hit 116 million this year.

China's state-run English newspaper China Daily reported that young parents in China invest all they have in their only child as the one child policy restricts them from having more children. This has led more and more parents to travel abroad so that their children can experience more of the world.

This suggests that to attract many Chinese tourists, a foreign city needs to offer a wide range of family friendly activities that enables them to experience unique local culture.

According to the WTCF report some 79.3 percent tried to obtain information on tourist destinations abroad from websites written in Chinese, while 53.7 percent found mobile devices and programs useful when travelling.

This shows how important it is to make tourist information available in Chinese and on mobile devices.

The report also found that those Chinese who could afford overseas trips earned $1,872 a month, three times higher than the average workers' salary in major Chinese cities. Their greatest concern while travelling abroad was transportation, and the biggest difficulty came from the language barrier, raising the need to put up traffic signs in Chinese and provide Chinese language services to draw Chinese tourists.

One Chinese businessman who travels to Korea frequently said "Chinese people love good food, and they highly rely on word of mouth. It's important to develop a menu that can satisfy Chinese tastes, and to leave a good impression".

"Seoul Tops Tourist Destinations Among Chinese"
by HanCinema is licensed under a Creative Commons Attribution-Share Alike 3.0 Unported License.
Based on a work from this source