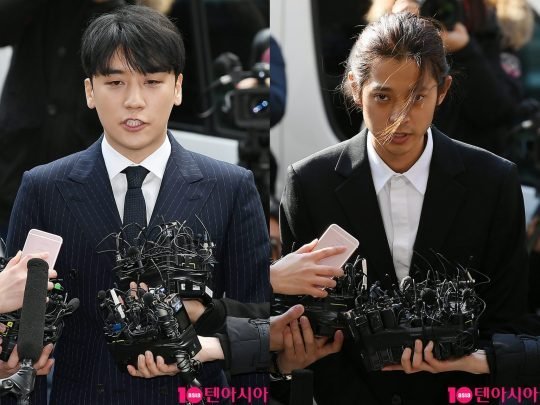 Seungri and Jung Joon-young's chat room has hit showbiz, society, and the international scene like a tsunami. The industry is suffering from the retirement of those involved and the suspension of certain TV shows.

There have been many cases where celebrities cause trouble with personal deviations, but there hasn't been one where sexual services, drugs, secret filming, drunk driving, and police ties are all inextricably woven. The Kakao Talk chat room that they participated in is revealing a new series of facts, and the impact is spreading.

Seungri, who is in the center of controversy, has announced his retirement and his agency YG Entertainment has also given up on him although he was once a symbol of the company. In the process of investigating the Kakao chat room, it turned out Jung Joon-young was involved with filming and spreading illegal videos, so he also quit all the TV shows he's on and retired. Yong Joon-young, a member of the group Highlight, was also found to have watched illegal videos shared by Jung Joon-young and had inappropriate conversations in the chat room and admitted to the allegations. He, too, left his K-pop group.

Through the Kakao chat room, it was revealed that FT Island Choi Jong-hoon had driven under intoxication and had bribed police to cover up the incident. He has also retired after the revelation. CN Blue's Lee Jong-hyun was found to have seen the illegal videos together in the same chat room and had promiscuous conversations. Fans demanded his withdrawal from the band.

The spotlight has turned female stars who have been in the same TV shows as Jung Joon-young. While rumors run wild regarding victims of Jung Joon-young, Jung Yoo-mi, Lee Chung-ah, Oh Yeon-seo, Oh Cho-ah, Kim Ji-hyang, Twice, and Black Pink have been hurt along the way. They have been releasing statements on their personal SNS's and through their agencies that the rumors aren't true and are even seeking legal actions.

A chat room involving Kim Jun-ho and Cha Tae-hyun from the KBS 2TV show "1 Night 2 Days" was found on Jung Joon-young's phone and word of their 'overseas golf betting' was revealed on KBS News on the 16th. They claimed they didn't go abroad to play golf and money won was returned on the day of, but they retired from the TV show.

The controversy that stemmed from the Seoul Gangnam club "Burning Sun" has fatally affected Big Bang, Highlight, FT Island, and CN Blue who are huge groups domestically and abroad. With each of their members gone, they have been disgraced and even overseas media report this case as a fatal blow to the K-pop community.

Even the shows they were on have been affected. "1 Night 2 Days" was criticized of having allowed Jung Joon-young back on the show in 2016 when he was charged with similar accusations. The 12 year running show has put on hold and the whole show just may be canceled.

Celebrities need to learn to manage themselves, especially when inundated by popularity, money, and power. Therefore, there is a growing public opinion that calls for a sturdier system and stronger responsibility of the agency that raises them and manages them.

As for the music industry, not only has it tainted K-pop and its image that has been built for over 20 years, but its idol-creating system is facing criticism. A source from England says the popular songs and dances from famous idols were creations made by the sacrifice of moral education.

A source from the K-pop industry says, "Stars, agencies and everyone else has to be aware of this case and make sure it never happens again. It is necessary for agencies to redefine their system of raising idols to the extent that doesn't conflict with human rights".

"Seungri and Jung Joon-young's Offenses Ripple Far Beyond Hallyu"
by HanCinema is licensed under a Creative Commons Attribution-Share Alike 3.0 Unported License.
Based on a work from this source