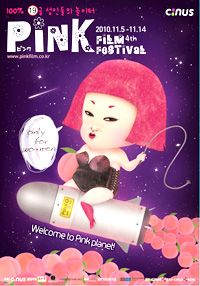 This year's box office was unusually crowded with hard-boiled thrillers and action films, with bubbly 3D animation providing some comic relief. While the temperature may be dropping theaters are expected to heat up with a lineup of sex comedies and racy melodramas, and even an R-rated film festival exclusively for women.

In 2002, the hapless wonders of gratuitous physical farce exposing a lot of skin took moviegoers by storm, and "Sex Is Zero" became a smash hit that outperformed Hollywood imports like "Titanic" three to one.

The sex comedy genre in Korean cinema has a history that barely spans a decade, with the Im Chang-jung powered slapstick

setting the blueprint for formulas that work with the local audience ― a mix of bare naked humor in the tradition of the "American Pie" franchise with a strong dose of heartfelt, mushy drama that tries to teach a lesson about matters of the heart.

The cinema scene has since seen a colorful array of loud titles, from nostalgic puberty stories ("Wet Dreams" & "Wet Dreams 2") to racy adventures set in the Joseon Kingdom (1392-1910) such as "A Tale of Legendary Libido".

Shin Ha-kyun breaks away from his serious roles as a police officer obsessed with organ size while Uhm Ji-won casts off her innocent image in the role of his sexually frustrated girlfriend, and even 1990s screen beauty Shim Hye-jin is probing the curiosity of fans as a single woman boasting a secret fetish for leather corsets beneath her elegant "hanbok" (Korean traditional costume).
During a promotional event for the film Monday in Seoul, Sin said, "There were (dirty) lines in the script that were difficult to repeat" while Eom said it was mortifying to have to ride a giant vibrator in one scene. "I've always brought my son to watch my films but I think he'll stay home this time", said Sung Dong-il.

"It's poking fun at the unusual sexual preferences of seemingly normal people", said director Lee Hae-yeong, the critically acclaimed auteur of "Like of Virgin".

Another sexy romantic comedy coming to theaters is "Jjejjehan Romance" ("Petty Romance"). Lee Sun-kyun, who has appealed to women of all ages as a romantic gentleman in TV soaps like "Coffee Prince", has grown a beard to play a scruffy cartoonist who teams up with an "imaginative" ― a euphemism for bluffing ― sex columnist ("My Scary Girl" sweetheart Choi Kang-hee) to enter a competition for adult comics. Directed by Kim Jeong-hoon-II, the film's release date has yet to be announced.

Opening in theaters Thursday is "Loveholic - 2010", the latest work by Kwon Chil-in. The director is best known for "Singles", which gained wide popularity for looking into the bittersweet sex life of single, disillusioned urbanites in their early 30s.

"Loveholic - 2010" offers a similar tale. Aspiring novelist Ji-heun is single and content, until she becomes the first to be laid off from her publishing company since she has no child to support. To make matters worse, her boyfriend of seven years leaves her and she finds herself penniless after a drunken fiasco. With nowhere to go, she moves in with a girlfriend Gyeong-lin (Han Soo-yeon), who is married to a smug, handsome doctor Myeong-won (Jung Chan). Though Gyeong-lin seems to be the perfect housewife she starts an affair with a younger man (Kim Heung-soo), mostly out of bemused boredom, while our protagonist becomes sexually involved with Myeong-won.

The film feigns the appearance of featuring relatable, down-to-earth characters that provide witty, candid insights into conflicting desires and growing pains, topped with provocative love scenes. But what we get is a messy lust ― rather than love ― quadrangle and no sign of character development, while the dialogue stops short of being superficial.

Moviegoers can look forward to something with an added dimension _ even 3D cinema will bear a touch of eroticism this season. The first local 3D film to show in theaters on Oct. 28 is "Natalie". The film's title refers to a famous female nude piece by sculptor Jun-heyok (Lee Sung-jae). The model of the piece has remained a great mystery in the art world, but a young critic (Kim Ji-hoon-I) claims to have also loved the femme fatale (Park Min-kyung) who had been Jun-hyeok's muse.

"Until now, if 2D films allowed the audience to view a character mourning death from outside the window, 3D allows them to actually feel the pain inside the room with the character", director Joo Kyeong-joong said in a press release.

The color pink has long been associated with things feminine, from Barbie-inspired accessories for girls to breast cancer awareness. But in Japan, pink refers to a film genre that boasts a history of 50 years.

Usually shot between three to five days with a 35-milimeter camera on a budget of 3 million yen, the classic pink film features four to five sex scenes over a running time of about 60 minutes. But moreover, these projects allow directors to harness their creativity to artistic ends, to explore eroticism with attention to experimental structure, dramatic development and capturing the spirit of its respective time period.

The Pink Film Festival was launched in Seoul in 2007 to show works that depict and question aspects of female sexuality. Women are invited to come and explore the subject at the fourth edition of the event, which runs from Nov. 5 to 14 at Cinus Isu and Ichae. Screenings will be specified "for women only" or "men also invited". Visit Open the link for more information.
_______________
A poster of the Pink Film Festival

"Sex comedies, romances to heat up theaters"
by HanCinema is licensed under a Creative Commons Attribution-Share Alike 3.0 Unported License.
Based on a work from this source