Shim Hyung-rae: 'I Made Comedy that Can Be Accepted Worldwide' 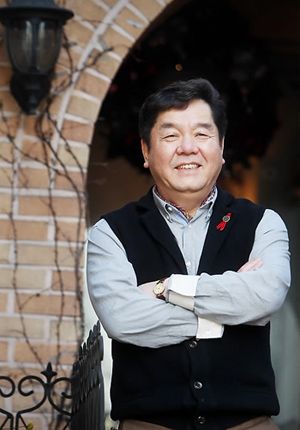 Shim Hyung-rae has directed the movie "The Last Godfather" and also played the protagonist.

Shim Hyung-rae, who had enjoyed the highest level of popularity as the best comedian from 1980s to 1990s and then made science fiction movies such as "Yonggari" and "D-War" aimed at the world movie industry, has come back to his specialty of comedies. The movie "The Last Godfather", which Shim had written, directed, and in which he played the protagonist, is a comedy movie about the mafia, and the released teaser video on the internet has generated huge anticipation about the movie. The movie is about a long-lost son of the mafia's godfather Don Carini (Harvey Keitel). The son named Younggu (Shim Hyung-rae) comes to New York to become the successor of the mafia boss.

Shim Hyung-rae, who came to a café located in Jongno for an interview on December 16, said that the movie "The Last Godfather" was a comedy movie that could be accepted in the world movie market beyond Korea. He said, "The concept is the most important. A comedy that only Koreans can understand is useless in the world market. There were many comedy movies, but they were all for Koreans. But everyone all around the world is familiar with 'mafia'. In the bloody and cruel world of the mafia, an innocent character named 'Younggu' appears, and many unexpected happenings will occur. Americans who had seen this movie actually regarded it a little bit strange, but liked the situation".

He continued, "We can make a pretty movie even with the main subject of 'mafia', if we change it a little bit. What this gloomy society needs is a comedy". He explained that every family member can enjoy this movie because he had diluted every element that was lascivious and violent to make it into a family movie, and he added American concepts of comedy in the movie because he had worked together with many American writers when he had written the script.

He first planned the movie "The Last Godfather" in 2007 when his movie "D-War" was released. He said, "When I said that I was going to make this movie, people regarded it as a joke, so I went crazy. If I said something seriously, people did not trust it. I told a journalist whom I met in LA that I came here to film a movie, and they did not ask me more questions because they might think that I said like that without thinking". The movie has been spotlighted by the fact that actor Harvey Keitel, who is famous for his appearances in the movies such as "Piano" and "Reservoir Dogs". Shim said, "I had gone through a lot of heartaches. I had to go to the agency and go to see a lawyer, and so on. Nothing ventured, nothing gained. So I had tried again and again to cast the actor. I felt that if I continued doing this, it might help other Korean directors who want to advance into Hollywood". Shim Hyung-rae explained that the actor Harvey Keitel had decided to appear in this movie because he wanted to show this movie to his four-year-old son. Harvey Keitel had reportedly treated Shim in a very friendly manner and he had shown enthusiasm for this movie by providing various ideas. Shim said, "Keitel once asked me to film a scene that we ride a swing together, but I could not accept his idea because it seemed to cost too much for filming". 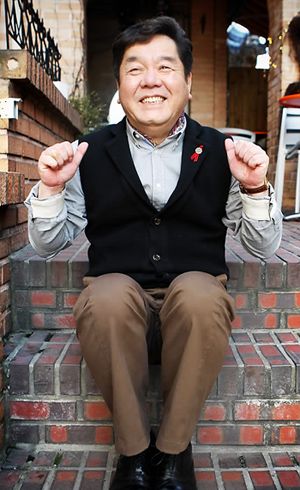 Shim said that American staff members really liked the character "Younggu", and he wanted to make a new "Younggu" series by taking this chance. He said, "Staff members told me that if I make a western movie in which 'Younggu' appears, it would have great success. When we have a character, then we can make a movie series like the movie "Wu Roe Mae". Shim also explained that the production company "Younggu Art", to which he belongs, displayed technical skills at the movie "The Last Godfather" as much as they did when making the movie "D-War". He said, "We had to build every building in New York and it was impossible even though we build a set, so we used many miniatures and 3D technology". When the movie "D-War" was released, there were heated discussions concerning the movie, enough to appear as a topic for TV debate program. Shim seemed to have a big scar caused by critics about the movie at that time. He said, "When the Korean soccer team has a match, we cheer for the Korean team, and when Park Tae Hwan swims, we cheer for him. I was just trying to advance into the Hollywood alone. People could have different opinions with me, but I think that they should not at least criticize something besides the movie itself". He also confessed that he felt even more pressured than the time when the movie "D-War" was released, so he could not sleep well at night. Shim said, "I can hardly have a deep sleep. This movie is not a movie only for me. Fans have cheered for me, so I cannot give up making movies".

Why does he try to make movies despite those pressures? He answered, "If I stop in the middle of doing something, it is much worse than doing nothing. I want to make a big achievement, so I am doing my best for it". About the question on whether he wanted to make a Korean movie that would rank atop the US box office, he answered frankly, saying, "It will be very nice. I want to make my dream of a Korean movie ranking atop Hollywood come true". The movie "The Last Godfather" will be released in Korea on December 30, and the schedule and scale of its release in the USA has not yet been decided. "I am discussing the matter whether we will release it on a small scale and then increase the number of theaters, or we will release it widely at once like we did for the movie 'D-War'. But I think that releasing it on a small scale in the big cities will lessen the burden".

Director Shim Hyung-rae mentioned that he had been preparing several next movies including the 3D version of the follow-up movie to "D-War" and a 3D animation movie entitled "Bun in Memories".

"Shim Hyung-rae: 'I Made Comedy that Can Be Accepted Worldwide'"
by HanCinema is licensed under a Creative Commons Attribution-Share Alike 3.0 Unported License.
Based on a work from this source