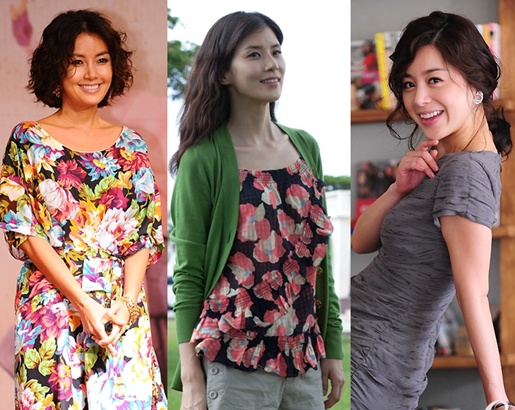 'Returned singles' will take over the home screens.

Oh Young-sim who was married into the family of Manwoldang, a house with a tradition of 300 years, witnessed her husband having an affair and suddenly became a widow as her husband passed away while she was preparing for divorce.

Oh Young-sim started working and she met the perfect guy Moon Sin-woo (Park Yoon-jae) who she fell in love with. Although this material has been used a lot in morning dramas, it still receives a lot of support from housewives.

This drama also notified the rebirth of daily MBC dramas that were set on one digit ratings and rated 14.3% as well.

"A Thousand Kisses" that is to be on air after MBC weekend drama "Twinkle Twinkle" will also tell the story of a 'returned single'. Based on the love story between a former national athlete agent who has tasted the bitters in life and a returned single, it is about the people who seek for consolation.

Actress Seo Young-hee has returned to home screens and national 'younger brother' Ji Hyun-woo is about to show everyone what a 'bad tempered guy' really is. Eyes are focused on if this drama will be able to continue to honor of a 20% rate "Twinkle Twinkle" is holding on to.

"Hooray for Love" which is to be on air on the 16th after the drama "Can You Hear my Heart" is a comic home drama about a woman who has been betrayed by her husband overcoming reality. Lee Bo-young is Kang Jae-mi who falls in love with womanizer lawyer Byeong Dong-woo (Lee Tae-sung).

Lee Bo-young said, "I decided on this drama because I wanted to show that I have the toughness in me to overcome reality. I hope you look forward to Jae-mi's new look".

We'll just have to wait and see what changes out-of-date materials will bring and if they will relate to viewers.

"Shin Ae-ra, Lee Bo-young, Seo Young-hee take over the screens"
by HanCinema is licensed under a Creative Commons Attribution-Share Alike 3.0 Unported License.
Based on a work from this source