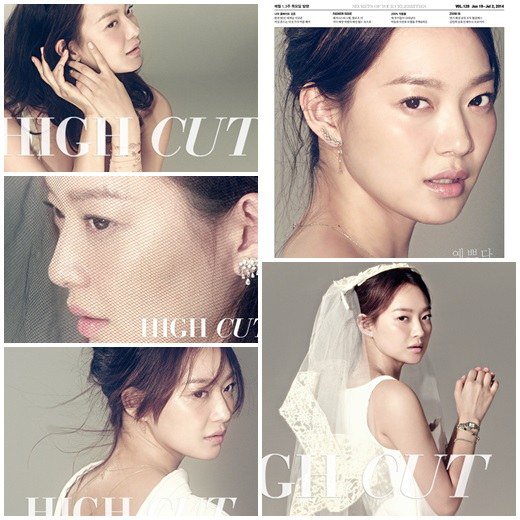 Shin Min-ah had a photo shoot with style magazine High Cut. An interview followed after that.

This photo shoot concept was elegant and lovely, as she was dressed as a bride in a veil, looking like a mysterious goddess. In the close up for the front cover, Shin Min-ah's face seemed flawless.

The actress talked about the real Yoon-hee in "Gyeongju" and how she likes to drink.

In the role of Yoon-hee in "Gyeongju", Shin Min-ah said, "She's very calm when she's making tea and she's very strict with the people around her. She isn't like the average girl". When she was asked if she was an average girl, she said, "I am not the typical kind. I like the old stuff. I've been told I am more mature than I look".

She also spoke about the way she drinks. She said, "I like soju and beer together. I don't drink to enjoy it but I drink to have fun. When I get tipsy, I'm all over the place. Maybe I just want to go to karaoke".

The photos of Shin Min-ah can be seen on the 128th issue of High Cut.

"Shin Min-ah's drinking style"
by HanCinema is licensed under a Creative Commons Attribution-Share Alike 3.0 Unported License.
Based on a work from this source