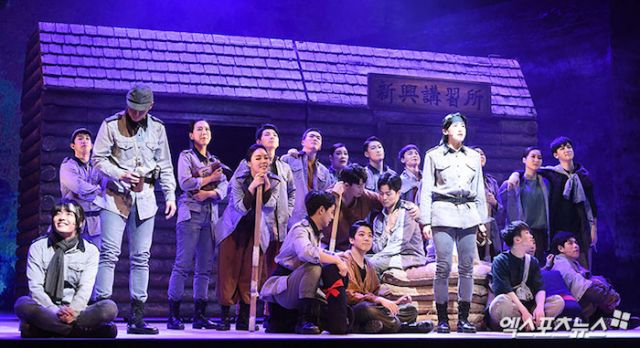 Due to the traffic accident in the afternoon of March 26th, the evening performance was cancelled to enable the passengers to undergo medical checkups, as needed.

At 10am on March 27th, the 3pm show was cancelled and the shows were supposed to resume at 8pm.

However, at 1pm, ShowNote cancelled the 8pm show to finally announce that performances will restart its normal schedule from March 28th. The decision was made to give the actors more time to rest.

All cancelled tickets will be refunded in full without fees.

On March 26th, the bus carrying the cast and crew of the musical was involved in a minor collision while en route to the venue of the musical.

Actor Kang Ha-neul, INFINITE's Kim Sung-kyu and some of the cast members mostly comprising of enlisted soldiers were aboard the bus. Thankfully, after medical examinations, there were no serious injuries and health problems reported.

SEM Company, Kang Ha-neul's agency informed, "We have spoken to Kang Ha-neul, and he said that he was fine. Just in case though, he said he was going to get himself examined at the hospital".

Kim Sung-kyu's management agency Woollim Entertainment also gave an saying, "We heard that the cast's car collided with another car. As far as we know, Kim Sung-kyu was not injured".

Army musical Shinheung Military Academy depicts the life of the youth who spearheaded the anti-Japanese movement during the Japanese colonial era. The production is part of the celebration that marks the 100th anniversary of the March 1 Independence Movement and the establishment of the Republic of Korea Provisional Government.

Performances are held at KwangLim Arts Center in Gangnam, Seoul until April 21, 2019. Nationwide tours will take place thereafter from May 4, 2019.

"Shinheung Military Academy performances to resume on March 28"
by HanCinema is licensed under a Creative Commons Attribution-Share Alike 3.0 Unported License.
Based on a work from this source