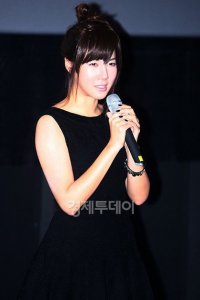 The upcoming drama "The Legend" which is scheduled to air starting June 25th has finally revealed the female actress for the role that will be opposite to Bae Yong-joon's character.

The MBC drama "The Legend" will air on Mondays and Tuesdays, and have been scheduled to have 24 episodes. The character opposite to Bae Yong-joon's character of Dam Duk, the 19th king of Goguryeo, is the character Soo Ji Ni, who will be played by the uprising newcomer Lee Ji-ah. She is known to have majored in graphic design and received her degree in the arts, and is also proficient in English.

Instead of picking top stars well-liked by the public such as Kim Tae-hee and Ha Ji-won, a newcomer was chosen, which shows the true intentions of director Kim Jong-hak. He wanted someone who could bring life into the character than someone who was just well-known.

After many rounds of auditions and selecting Lee Ji-ah, director Kim Jong-hak said, "she has Shim Eun-ha's beauty and Go Hyun-jung's strength. She is like the female warrior character of Soo Ji Ni, who is honest, frank, and refreshing".

Lee Ji-ah has received the best opportunity to work with a top Korean star Bae Yong-joon and become a top star herself in the 43 billion won drama "The Legend".

"The Legend" started filming since last March, and has completed about 60% of the filming current to date. Director Kim Jong-hak, who had made national dramas such as "Eyes of the Dawn", "Sandglass", etc, has everyone's attention for this upcoming drama.