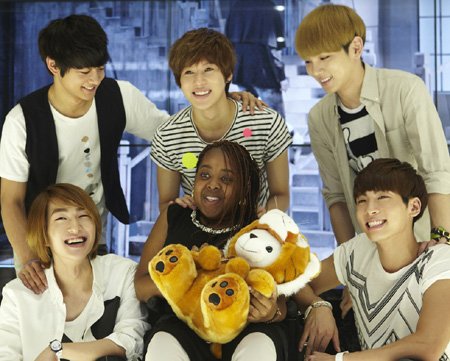 Donika Sterling (center front) smiles as she meets her favorite band SHINee in Seoul on Wednesday. /Courtesy of SM Entertainment

About a decade ago, Donika Sterling became afflicted with Charcot-Marie-Tooth disease, which gradually causes the loss of muscle tissue and slows down parts of the body. Now the 15-year-old girl cannot move without the aid of a wheelchair. She became a fan of SHINee after watching the boy band on YouTube, and told her grandmother that her dream was to go to Korea and meet the band members.

Her dream came true on Wednesday when Sterling got a chance to spend an hour with the band at SM Entertainment's headquarters in southern Seoul.

SHINee presented Sterling with a teddy bear, their album and posters. Group member Tae-min even gave her his prized bracelet. The band then sang Sterling's favorite song "Ring Ding Dong" and performed some dance routines for her.

"We were extremely touched after hearing her say that our music gave her strength", Tae-min said. "Please don't lose your courage".

The boy band promised to invite her to their concert if they get a chance to perform in New York. Sterling smiled and said she would cherish the memory. She also gave Tae-min, her favorite band member, a letter she wrote.

Sterling, who came to Korea with her mother, grandmother and a nurse on Saturday, also got the chance to meet another leading K-pop outfit, boy band Super Junior, on Sunday.

Her trip to Korea was funded by Canadian multi-millionaire Herbert Black, CEO of Montreal-based American Iron & Metal. Sterling's grandmother, who is a nurse, took care of Black when he was hospitalized. The CEO wanted to show his gratitude by making the teenager's wish come true. The Sterlings will remain in Korea until early July.

"Sick U.S. Teen Fulfills Dream of Singing with SHINee"
by HanCinema is licensed under a Creative Commons Attribution-Share Alike 3.0 Unported License.
Based on a work from this source