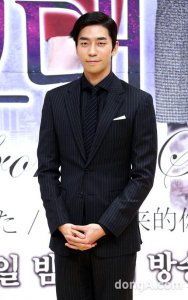 Shin Sung-rok might be one of the busiest actors in the business these days, with work ranging from a TV drama and a variety show to a musical.

Sin, better known as a musical star, is currently garnering fresh popularity from a reality TV show, "We Got Married", and a recently-finished drama, "The Golden Age of My Life". But he is shining the most brightly on stage in the ongoing musical "My Scary Girl".

"My Scary Girl", based on the Korean film of the same title, is now on stage at Chungmu Art Hall after a year of revision and development.

"The musical is like my old home and it made me what I am now, so I can't stop performing the musicals however busy I get. I always covet a good musical and try to do it because a good musical won't wait for me", Sin said in an interview with The Korea Times.

Sin debuted in the musical "Mosquito" in 2004 and starred in some 10 musicals later on. The 27-year-old actor originally dreamed of becoming a basketball player when he was young, but after an injury, he aimed to become an actor.

"Many good actors started their acting careers on the stage, so I decided to do the same and build up acting experience and hone my craft", he said.

Sin said that when he performed in the musical "Mosquito", there were only 20-25 audience members in the 500-seat hall. "I was really depressed and frustrated but the experience made me strong and helped me become an actor with plenty of guts", said Sin.

In the musical "My Scary Girl", Sin plays Hwang Dae-woo, a 30-year-old college English instructor who's never had a date. He falls in love with a mysterious girl named Lee Mina, who murders several men.

As in the film, the character of Dae-woo, shy, wacky and fainthearted, is crucial for delivering black humor and romantic elements to the audience.

"It's a romantic comedy but the uniquely clownish characters and wacky storyline deliver hearty amusement", he said.

In the musical, a kimchi refrigerator, which is used to store the corpses, plays a key role in unfolding the plot. Meanwhile, two actors with multiple roles, who play Mina's ex-boyfriend, a ghost and other characters, are good for the musical's comical twist.

"I like this kind of shy and fainthearted character, and I'm good at it. Dae-woo resembles me in some senses; I am also faint-hearted in some ways, so it was fun for me to play Dae-woo. I was confident that it would be successful. I also think it's proper for small-sized theaters in which the audience can communicate with actors and feel their every breath", Sin said.

He said the musical is unique. "It's sad and at the same time funny. I don't think the musical should be the same as the film. It portrays the work differently. We just adopt the good elements from the film on stage. Just enjoy the musical version without comparing it with the film", said Sin.

Asked about his interpretation of the role, he said he tries to portray the character while interacting with the counterpart. "I don't intentionally make my own character appeal to the audience. But I communicate with a director in making the scenes better and sometimes it works and then some scenes get changed", he said.

He has recently finished the drama, "The Golden Age of My Life", in which he had a leading role. "When I starred in a TV drama, I felt uncomfortable with equipment around. But now I feel at ease and can concentrate on my role", he said.

Sin said that he believes his foray into variety shows and films and TV dramas might help draw larger audiences to the theater. "I hope many become familiar with me through more diverse channels and come to see the musicals and boost musical culture. Personally, I want to let my name become widely known to general audiences", he said.

Concerning the recent boom of celebrities rushing to musicals, he said it's a matter of choice for them but the result can be harsh for some.

"Any stars can join musical performances. But if they are not competent enough to show their talents on stage, their appearances on stage will be their first and their last. But some celebrities, such as Bada, Ock Joo-hyun and Lee Ji-hoon have been successful and their performances are well appreciated among their peers", he said.

He said that after "We Got Married", he would stop appearing on variety entertainment shows to focus on acting.

"I like musicals because I can communicate with the audience. Also, TV dramas and films are good at portraying characters in detail. I will show better performances in my new work", he said.

"My Scary Girl" debuted in the United States last July. The musical joined the lineup of the 2008 Musical Theater Lab for new musicals in the development of the Barrington Stage Company (BSC). It was the first Korean work ever selected by the BSC, the renowned American performing arts support group, to be presented to its theater lab.

Based on a 2006 Korean comedy/horror/romance film, "My Scary Girl" received positive reviews in the United States for its fresh and creative ideas.

Prominent composer Will Aronson provides the music with lyrics by Kang Kyoung-ae, who co-wrote a book with Mark St. Germain.