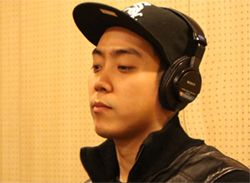 According to an entertainment source on April 7th, singer and popular TV personality Eun Ji-won left the country for Hawaii in preparation for his upcoming wedding. This is appropriate being that while studying abroad, this is where he met his future bride. When Eun first announced the wedding news, there was a lot of hype over the fact that the two-year older future Mrs. was the older sister of former Miss Korea Lee Soo-jin, who's also the wife of soccer star Lee Dong-gook.

The source couldn't reveal the exact date and location of the wedding, but did say that it would be an intimate ceremony of just Eun and his bride-to-be's close family and friends. Also, being that the "1 Night 2 Days" ("1박2일") star is so busy, rather than jetting off on a separate honeymoon, the newlywed couple plans on extending their stay in Hawaii for a honeymoon there.

Eun's representative said that the couple is keeping tight lipped about the details, sharing them only with their close family and friends. The rep added that after filming what's worth three weeks of airing time for the hit show "1 Night 2 Days", Eun was able to take off for a wedding in early April as originally planned.