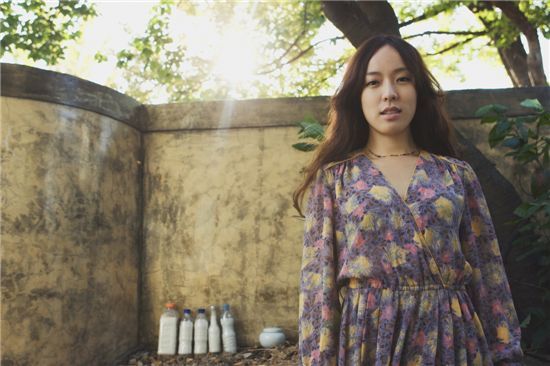 "The second time around wasn't any easier. I felt a huge amount of pressure this time around as well. I'm familiar with feeling jitters from performing music because that is what I always did. But the pressure I get from acting goes far beyond that", said Yozoh, the female indie singer who has contributed much to bringing Hongik University district's indie music to the mainstream. She is still not familiar with her new title as an actress and stands in awe of her fellow actors who seem natural with stage appearences and press conferences.

Her filmography, as short as it is, says otherwise. After being picked up to play a part in "Cafe Noir" (2009) a debut film of the famous film critic-turned-director Jung Sung-il, she landed on a bigger role in "Come, Closer" (2010) which is the first full-length feature by director Kim Jong-kwan who is skilled at expressing deep emotions on screen. She was invited to the Pusan International Film Festival in Busan twice in a row with just these two roles. In "Come, Closer" in particular she managed to pull off her scene which only contains dialogue, also across her first-ever scene partner. Hye-young, the girl Yozoh played is half-hearted in both love and love affairs. She will seem a complete stranger to those who remembers Yozoh at the singer who sweetly sings about love and everyday life. But the way Yozoh talks about the limitation of love affairs and how useless love can be in itself offer the fun of twisting her character.

Thus the singing-and-acting-girl Yozoh continues to move back and forth between the two careers, sometimes breaking free to try new acts and other times, returning to her roots to sing about her everyday life. And along the way she pledges to keep "noticing things that normally slip past people's minds - just like the girl Amelie in 'the French film 'Amelie Of Montmartre (2001)'. According to Yozoh that is her creed. It is also what most of her favorite films are like, the kinds that will permeate your heart without the help of unexpected twist or huge turnarounds in plot. Following are films that were so good to Yozoh that she still remembers every scene and the big lines by heart.

1. King Of Comedy (1999) directed by Stephen Chow and Lee Lik-chi
"King of Comedy" is such a wonderful romantic film. I cried when Chow and Piu got separated after spending a night together. I cried again at the last scene. I think Stephen Chow is a terrific actor. Not that I mind the older version of him as he is now but he was just so cute back in his early movie "Fight Back to School (1991), (laughs)".

Stephen Chow never gives up on his comical ruse even when playing the most romantic scenes, raising no doubt that he truly is the "King of Comedy". But the romance between Chow (Stephen Chow) and Piu (Cecilia Cheung) was also done with a weight of its own which makes the film good enough to be called a good romance as well.

2. Paris, Texas (1984) directed by Wim Wenders
"Once as I was posing for a photo music by the band 'Travis" flowed in. The photographer who was working with me asked whether I watched "Paris, Texas" and said the main character's name was Travis. All I along I thought Travis was the name of the band but I found out later that the band named itself 'Travis' after watching the movie and was left completely charmed by it. I love the dialogue that went between the main character Travis and his wife Jane with booth in the middle. I love it so much that I wish to make lyrics out of it".

"Paris, Texas", which portrays an ordeal of one man who tries to return after losing all his memories leaves a strong, lasting image after the ending credit. The music performance by Ry Cooder who stars in director Wim Wenders' documentary makes it even more unforgettable. The film won Grand Prix in the 37th Cannes Film Festival.

3. Away We Go (2009) directed by Sam Mendes
"Away We Go" has great music and besides, don't you find the main guy adorable, too? (laugh) After finishing the film my first urge was to meet such an adorable guy like him. Because it's a road movie the so many episodes that involve different people make me think of lots of things. I think I was able to relate to better because I'm old enough to ponder about marriage and having kids".

You wouldn't believe this movie is by the same director who made "Revolutionary Road (2008)" Unlike the previous film that showed a couple falling apart with deception, misunderstanding and mistrust, the young couple in "Away We Go" who travel across the United States and seeking their own path is drawn out as healthy and beautiful.

4. Amelie Of Montmartre (2001) directed by Jean-Pierre Jeunet
"When I watched 'Amelie' I thought I'd live just like her. She really knows how to make her day as ordinary as it is. She catches things that normally slip from people's attention, things like how someone like to empty their bags only to put it back again and someone who like to repeat putting hands inside a grain sack. I grew the habit of observing small things after watching the film. I even went to the subway station just to see what's below the instant picture camera (laugh).

Everyone is gifted with full 24-hours a day but to Amelie (Audrey Tautou) who sees everything with wonder and expectation, the day is just too short. Cheers to Amelie who presents an opportunity to fall in love or a chance to make a wonderful memory to those who spend their days bored and empty.

The Darjeeling Limited (2007) directed by Wes Anderson
"First and foremost, Wes Anderson's movie boasts such a beautiful image. Each and every character is really funny, too. I thought I would die of laughter at the scene when the three brothers stand in line to cite magic spells after meeting their mother (laugh). The film also made me want to travel on a train".

The unique style of West Anderson could be felt in every part of the film "Darjeeling Limited" The luxury within the train's sleeping cart and the big, fancy suitcases forms a weird contrast with an ordeal that the three brothers go through, evoking a great deal of laughter.