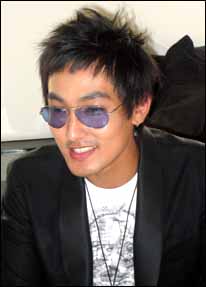 Fans have a little more than week before Kangta returns to the small screen. However, this time the singer won't be greeting his fans in a K-pop countdown program, but in his acting debut.

The popular singer is cast in the lead role of an upcoming KBS mini-series "Loveholic". He plays Soh Kang-wook, a high-school student who falls for his teacher. Cast opposite Kangta, Kim Gyu-ri plays teacher Lee Yeol-joo.

"I don't expect many good reviews, I would be happy if people just saw Kangta as the character Kang-wook", Kangta said in a group interview following a news conference held in Seoul last week.

As an actor he has decided to go by his real name, Ahn Chil-hyun.

"I think that using my real name will help me take on acting more seriously", the 25-year-old said.

Kangta debuted as the lead vocalist of boy band H.O.T. in the mid 1990s. Since the disbanding of the group in 2001, he has flown solo as an R&B singer, releasing three albums to date.

In regards to the growing number of pop artists crossing over into acting, Kangta said that he had at first insisted on sticking to singing.

"I was told I was being stubborn. The music industry is in a slump. I came to the conclusion that it would be a shame to see my talent go to waste, which is why I decided to go for it", he said.

Kangta went on to talk of how much he hesitated before accepting the offer to star in "Loveholic". But the hesitation and tension didn't end there. "Then came the jitters and prior to my first shoot I got sick, catching a cold and laryngitis.

"Now I feel a little more at ease. I spend a lot of time studying the script and my character", he said.

Kangta also expressed interest in acting in movies and composing film scores in the future.

"Who understands the character's state of mind better than the actor himself?" he said. "I hope to become the music director of the films I appear in".

"Singer Kangta Makes Acting Debut"
by HanCinema is licensed under a Creative Commons Attribution-Share Alike 3.0 Unported License.
Based on a work from this source