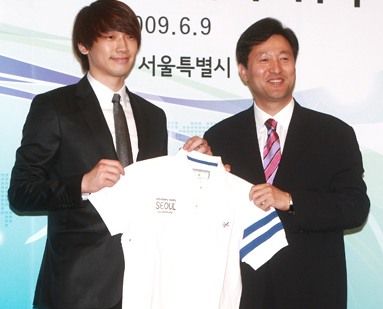 Rain was featured in "Hip Korea, Seoul Vibes", a documentary co-produced by Seoul City and Discovery Channel promoting the city and its pop culture. The 45-minute program aired in Asia and Australia earlier this year, showing the young and dynamic aspects of Seoul with Rain motorcycling through the Hongik University area, Cheongdam-dong and along Cheonggye Stream.

After shooting the documentary, Seoul City asked Jung to become its global goodwill ambassador, to better publicize the city as a part of its overseas promotion.

Mayor Oh Se-hoon thanked Rain for his role in publicizing the city and asked Jung to promote the capital's vibrant charms at the appointment ceremony.

"I am glad to join promoting Seoul as a native Seoulite", Rain said.

Jung donated T-shirts he designed himself bearing the slogan for the city this year, "Infinitely Yours, Seoul". The shirts will be auctioned and the proceeds will go to charity.

The city also plans to hold associated promotions at his Asia concert tour stops, such as distributing souvenirs and establishing a promotion booth.

Moreover, Rain will again appear on a documentary of Seoul that will be broadcast on CNN later this year.

After making his debut in 2002, the 26-year-old singer gained popularity both inside and outside the nation and also starred in several hit dramas including "Full House" (2004).

He also appeared in Hollywood movie "Speed Racer" last year ― another movie, "Ninja Assassin", produced by the Wachowski brothers will be released this year.
________________________
Rain, a renowned singer and actor, holds a T-shirt designed by him with Seoul Mayor Oh Se-hoon at an appointment ceremony at Seoul City Hall, Tuesday. Rain was appointed as the first global goodwill ambassador for the capital to better publicize the city overseas. / Yonhap

"Singer Rain to Promote Seoul's Global Image"
by HanCinema is licensed under a Creative Commons Attribution-Share Alike 3.0 Unported License.
Based on a work from this source