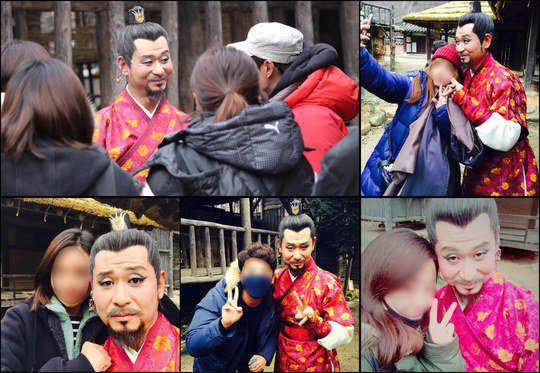 The last few scenes of Gil Tae-mi played by Park Hyuk-kwon were revealed.

SBS drama "Six Flying Dragons" Gil Tae-mi actor Park Hyuk-kwon took some time to take pictures with staff members on site. Some of these pictures came up on SNS.

The pictures of Park Hyuk-kwon are of him dressed as Gil Tae-mi, laughing and chatting with the staff.

Park Hyuk-kwon did his best till the very last and he seemed relieved at the fact that he didn't have to endure the long hours of make-up anymore but wanted to remember himself as Gil Tae-mi through pictures.

Park Hyuk-kwon performed his best until the very end when Gil Tae-mi dies but he's going to come back soon as Gil Tae-mi's twin Gil Seon-mi.

Netizens who saw these pictures say, "He looks happy", "I miss him already", "Come back soon" and more.

Meanwhile, "Six Flying Dragons" can be seen every Monday and Tuesday at 10PM.

""Six Flying Dragons" Park Hyuk-kwon, time to erase the eyeliner on Gil Tae-mi"
by HanCinema is licensed under a Creative Commons Attribution-Share Alike 3.0 Unported License.
Based on a work from this source