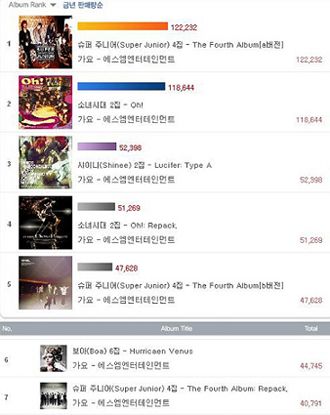 As if the company needed any more evidence to prove itself as one of the top entertainment agencies in Korea, a report was recently released showing just how much SM Entertainment dominates the kpop industry. Hanteo, a website the keeps track of domestic album sales, released a report on August 18th, showing that SM artists took the top seven spots when it came to total album sales from January 1 to August 17, 2010.?

Super Junior, a group that has already proved itself in being a sure album-seller took the number one spot with their Fourth Album, version A. After having been released this past May, the album -- which contains their hit title song "Bonamana" -- has sold 122,232 copies.

Second place went to the nine-membered girl group, Girls' Generation. Their second album, featuring the hit song "Oh!", boasted 118,644 in album sales. Third place was taken by another SM boy group, SHINee. SHINee made their comeback just this past July giving their second album only a few weeks of circulation time before this report was released. However, those few weeks were enough as they sold 52,398 copies of "Lucifer-Type A" featuring the catchy tune "Lucifer".

The SM domination doesn't stop there. Asia's Star made her long awaited comeback in Korea after five long years. Having released her sixth album "Hurricane Venus" on August 2nd, BoA ranked sixth in album sales with a total of 44,745 copies sold to date.

You may be wondering, so who took 4th, 5th, and 7th place? It was the same artists that took 1st and 2nd place: Super Junior and Girls' Generation. "Oh!" the repackaged album sold 51,269 copies clinching the fourth spot, while Super Junior's Fourth Album, version B sold 47,628 copies which was enough to place fifth. As for the seventh spot, it was once again Super Junior with their Repackaged Fourth Album which saw 40,791 copies be sold.?Filling up the remaining three slots in the top 10 were non-SM artists Jay Park, 2AM, and Rain placing 8th, 9th, and 10th respectively.

One thing to note though is that the two companies strong enough to compete with SM didn't put their best foot forward for the earlier half of 2010. JYP Entertainment, home to the Wonder Girls, 2PM, and 2AM focused on US activities. The Wonder Girls cut their promotion time for "2 Different Tears" short to focus back on tackling the US market. 2PM and 2AM were also absent from the country for a few weeks out of the year to tour as the girls' opening acts. As for YG Entertainment, although we did see the comeback of some of their star solo artists (think Se7en and Gummy), their real ace-players were M.I.A. Idol groups Big Bang and 2NE1 didn't release any albums this year, although recent reports have indicated that this will soon be changing. 2NE1 is set to make a comeback in September.

We'll have to keep watch and see if YG, or any other company for that matter, has what it takes to turn these rankings around in their favor by the end of 2010.